The most storied of the island’s venues, the Oval as it is known has seen some of Sri Lanka’s greatest Tests. It is the only Asian venue to have been graced by the legendary Australian batsman Don Bradman who brought his 1948 ‘Invincibles’ side to play a match at the Oval. This was during their stopover in Colombo en route to that year’s Ashes in England. The Oval also hosted Sri Lanka’s debut Test against England in 1982.

Through the years, a number of exceptional Sri Lankan cricketers have honed their craft at this ground. Muttiah Muralitharan, the game’s most prolific international bowler, played much of his first-class cricket at the Oval. And the ground was also a home venue for Rangana Herath – Test cricket’s most successful left-arm bowler.

And Mahadevan Sathasivam, who is widely believed to be Sri Lanka’s (or Ceylon, as it was then) greatest pre-Test batsman, played the majority of his cricket here as well.

Though several new buildings have been erected on the ground’s periphery, the Oval retains much of its old-world charm. The ivy covered scoreboard is a particular delight, as is the low slung Tryphon Mirando stand, which is lined with rows of mahogany benches.

Thanks to the bowler friendly nature of the Oval’s pitch, it is perhaps the most result oriented venue in the world with only one draw having taken place here in the last 22 years. And although the Oval offers plenty of turn to spinners, it is also renowned for bounce and carry, which means that the quicks usually enjoy bowling here too.

Wide open grass banks and rustic stands characterise this venue, which has been home to the Singhalese Sports Club since 1952. Once the site of a World War II aerodrome, the SSC hosted its first Test in 1984.

Today, it is also a hub of cricket administration – Sri Lanka Cricket and the Asian Cricket Council have their headquarters in buildings adjoining the ground.

The venue has been a breeding ground for many of Sri Lanka’s best.

Located in one of Colombo’s leafiest neighbourhoods, the SSC lies adjacent to a number of first-class venues – namely the Nondescripts Cricket Club (NCC) next door, Colombo Cricket Club (CCC) across the road, and Bloomfield Cricket and Athletic Club only a few minutes’ drive away.

The pitch here is more suited to batting than most others in the country. But still, it generally offers fast bowlers plenty of movement on the first morning of a Test before the spinners gain rapid turn on later days. 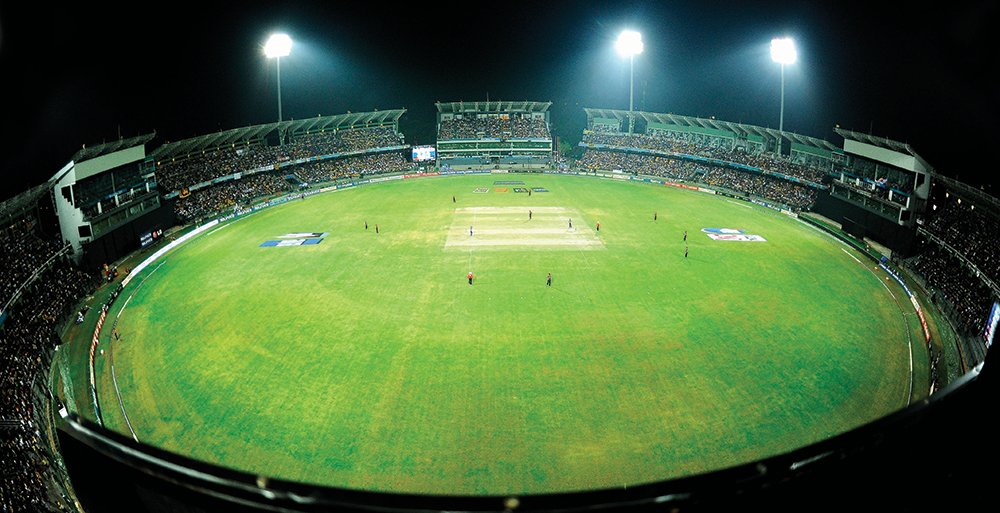 The most recognisable limited overs venue in Sri Lanka – one that has hosted a Cricket World Cup semi-final and a World T20 final – the R. Premadasa Stadium (colloquially called Khettarama) has seen more than its share of thrillers.

Set in Colombo’s northern reaches, Khettarama has gained a reputation for being a people’s ground with the venue easily accessible to residents of nearby neighbourhoods. At capacity, its stands and terraces can hold 35,000 spectators – and it goes without saying that this ground makes for a vibrant atmosphere unlike any other in the country.

Khettarama hosted its first ODI in 1986; and in the early ’90s, it became the first Sri Lankan venue to be fitted with floodlights. The record for the highest Test score was set here in 1997 when Sri Lanka amassed 952 for 7 against India.

In 2010, the Khettarama outfield and stands were overhauled in preparation for the 2011 ICC Cricket World Cup. Sri Lanka won the quarter-final and semi-final of the tournament at this ground with Muralitharan taking his last international wicket on home soil in the process.

One of the most unique vistas in cricket with the brooding grey of the 16th century Dutch Fort in the background and the cobalt of the Indian Ocean on either side, the Galle International Cricket Stadium is a favourite ground among many players. Moreover, it is a destination venue for international fans.

The ground also offers perhaps the best free view in cricket with matches visible from the Fort ramparts that overlook the ground.

Galle hosted its inaugural first-class game in 1984 before becoming a Test venue in 1998. But having hosted 11 Tests, the venue faced disaster in 2004 when it was caught up in the devastating Asian tsunami.

Thanks to fundraising efforts however, it has since been restored to its former glory. Test cricket resumed here in 2007.

The surface at Galle is reputed as one of the toughest examinations of batting technique against spin. Muralitharan claimed more than 100 scalps at this venue and it was here that the wizard of spin took his 800th Test wicket. In the years since Murali’s retirement, Herath made Galle his favourite hunting ground as well – he claimed 100 wickets at this venue.

Although it is the spinners who are often the greater threat at the Galle International Cricket Stadium, reverse swing has also been regularly seen, which ensures that seamers aren’t completely without assistance. The sea breeze that blows across the ground can also aid conventional swing with the new ball.

Dambulla Stadium was Sri Lanka’s first Dry Zone venue and as such, it is capable of hosting matches when venues in Colombo, Galle and Kandy are beset by inclement weather.

Set in a picturesque location overlooking the Dambulla reservoir, the ground is also situated near the town’s cave temple, which is a UNESCO World Heritage Site.

The ground hosted its first ODI in 2001 before receiving its first set of floodlights two years later. The floodlights were later upgraded in 2016 to bring them into compliance with international standards. The venue now regularly hosts limited overs internationals.

Another of Sri Lanka’s endlessly captivating venues, Pallekele stadium is perched amid the peaks east of Kandy and offers sensational views of the Hunnasgiriya range. Although initially built for the Cricket World Cup, it has taken over from the Asgiriya Stadium as the hill country’s premier Test ground as well.

The surface at Pallekele often excites quick bowlers, with seam and swing on offer especially under lights. The cooler temperatures in the hills also provide relief from the heat and humidity of the low country venues

Fringed by grass banks and with stands at either end, Pallekele features one of Sri Lanka’s biggest and most comprehensive scoreboards, the top of which offers breathtaking views towards the west.

With towering stands and an enormous playing area, this stadium dwarfs the surrounding jungle and presents unique challenges to players. Freque­ntly beset by a crosswind in the afternoon, teams often plan their strategies to take advantage of the conditions – batsmen generally aiming to hit with the wind while captains protect one side of the field.

Having been built for the 2011 Cricket World Cup, the Mahinda Rajapaksa International Cricket Stadium is the most far-flung of Sri Lanka’s major venues – there aren’t any major cities or towns in the vicinity although an international airport is located not far away.

Due to the size of its main grandstand and sweeping grass banks that fringe the venue, the ground has an estimated seating capacity of 35,000.