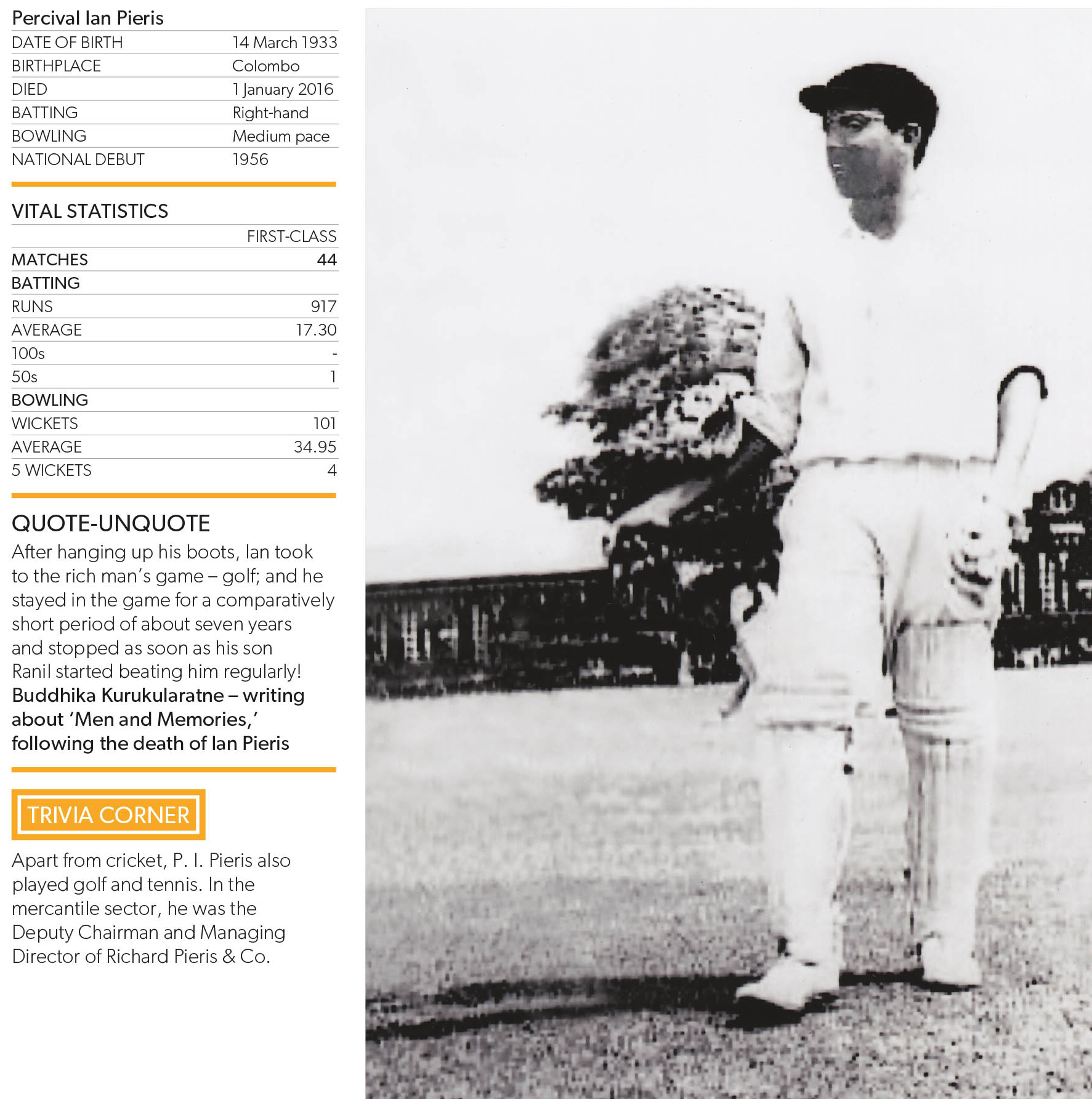 An early ambition to shine in one’s chosen field of endeavour often yields rich dividends. And for P. I. Pieris, the aspiration was to play the summer game at the hallowed home of cricket – Lord’s.

But there was to be a long haul to tread before that dream would come true. And that he shone along the journey no doubt made reaching his destination so much more fulfilling.

An all-rounder, ‘PI’ could bat and bowl with distinction. He made his mark as a top order batsman at S. Thomas’ where he played First XI cricket for four years. His better seasons were 1952 and 1953 when the Thomians beat traditional rivals Royal by eight wickets, and an innings and 34 runs respectively.

At the time, Pieris played as a batsman who could bowl. But by the time he ended his school cricket career, bowling had emerged as his forte – so much so that he was selected as a bowling all-rounder and eventually opened the attack for S. Thomas’.

His batting had not faded into the background, however. In 1953, Pieris scored a scintillating 123 for the school he now captained, featuring in a record fifth wicket partnership of 187 while also capturing six Royal wickets.

Small wonder then that it was while he was schooling that the young Ian made his international debut for Sri Lanka. That was when he was picked to shoulder arms against Lindsay Hassett’s Australians.

Following this early entry into first-class cricket was a stint at Cambridge, which earned him not only a degree in economics but also a Cantabrigian Blue. The right-arm medium pacer sparred with traditional rivals Oxford while labouring alongside the likes of Ted Dexter and compatriot Gamini Goonesena. He was also in the side that beat the Oxonians in 1957 and 1958.

Back in Sri Lanka, PI took up cudgels on behalf of his club SSC. He was also included in the national squad and a colleague from his Arpico days remembers the “legendary exploits” of the gallant Ian at both club and country level.

As for his entertaining innings cited in ‘The Lion Moment’ above, let the words of the last man in recall both his mood and mettle: “I was angry with the captain, the selectors and everybody else because I was sent in to bat at No. 11. I felt there were many [others who were not as good] who were sent in before me. I was so angry that I thought to myself, ‘I’m going to show these chaps that I can bat.’ Fortunately for me, Neil also stuck it out. That’s how I scored 46 not out, fuelled by cold fury.”

The fiery temperament was to mellow into a warm heart in his later years, long after the fires of playing at Lord’s had died down. And it is with grateful admiration that his peers and subordinates at Richard Pieris & Co. – which he drove to new entrepreneurial heights – remember him.

A pioneer of many rubber related commercial ventures, ‘PI’ was a personable business leader – Pieris was revered at Arpico where he hobnobbed with staff of all ranks. When a substantial grant to sponsor children of employees was approved, he reportedly asked why it wasn’t done earlier! Such was his commitment to those who worked for him.

Equally memorable for a cool head perhaps is P. I. Pieris being that rare calibre of gifted individual with more than a modicum of integrity – possibly therefore, the only administrator to resign on a matter of principle from the Board of Control for Cricket in Sri Lanka!

P. I. Pieris’ stand out contribution to the island’s then burgeoning cricketing portfolio was perhaps his unbeaten 46 in a stubborn but entertaining last wicket partnership of 110 over the course of 53 minutes with Neil Chanmugam in an unforgettable unofficial Test against a star-studded West Indies team in 1967. The grit of a pace bowler with a bat in hand was certainly on show!