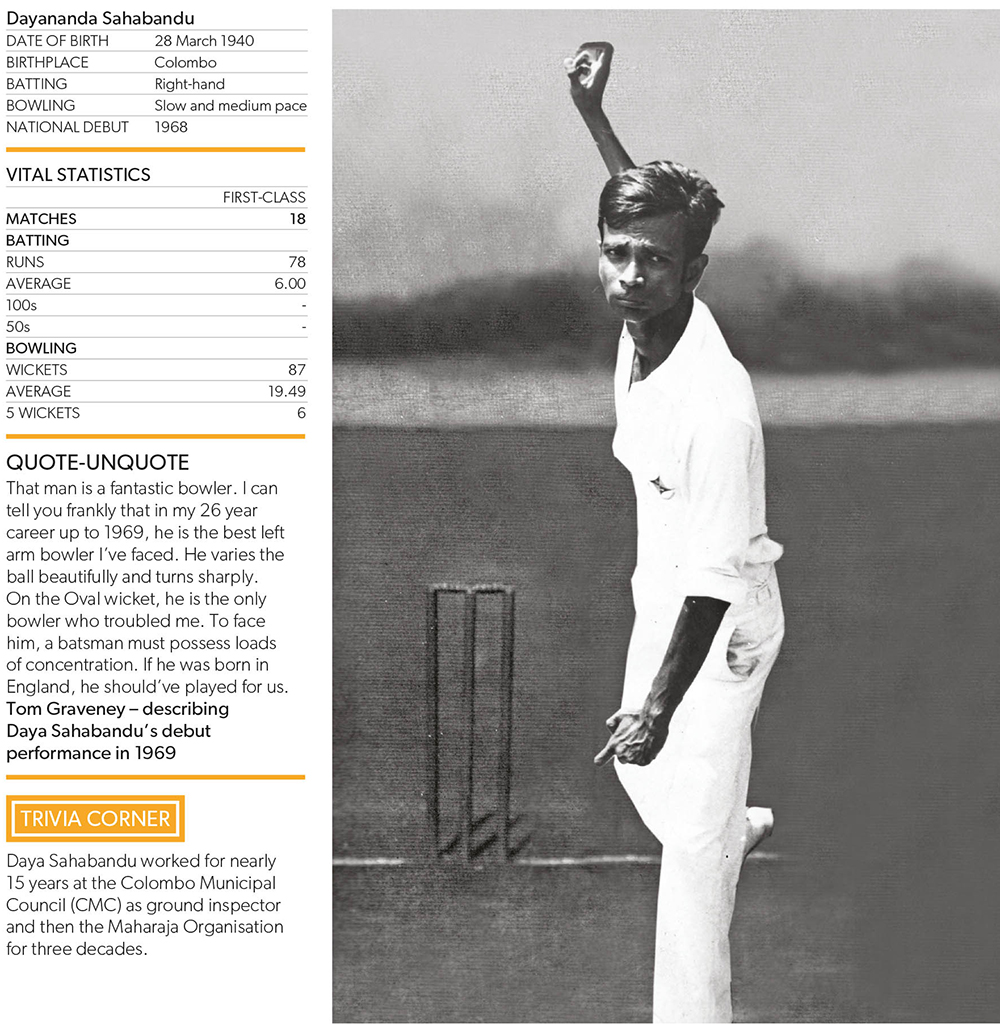 Those who recall what he looked like may wonder how Daya Sahabandu could get anything done, let alone be remembered as Sri Lanka’s best left-arm bowler of a generation.

Among the fonder recorded reminiscences is that as a young lad, he was a ‘scrawny little chap’ who grew up into an ‘unassuming pencil slim’ dual purpose bowler.

Others have a more sterling impression of ‘a quiet man whose character was in his bowling’ with a ‘golden arm and long tapering fingers.’

These recollections typify a humble servant of the gentlemen’s game who has also been described as a ‘relatively gentle left arm bowler.’ Other descriptions range from him being ‘mesmerising’ to ‘a player of guts and determination who always put country before self.’

In the main however, portrayals of his physical appearance paint a picture of a gawky gangling figure of no great distinction except for his height and slender build – he is an inch taller than six feet and ‘lean in the hips,’ they said. But his boylike zest often contributed to humour in the dressing room – Sahabandu was known for his wacky mannerisms.

The impression then is of someone who was characteristically guileless, delightfully eccentric and perpetually boyish. More importantly perhaps, he appeared to be incapable of making enemies – yes, even on the cricket field!

Daya Sahabandu once reportedly recollected how the peanut vendor, pineapple seller, umpires, scorers, ground boys, spectators and players would travel to a game in a Ceylon Transport Board (CTB) carriage – even for international matches! Only a few “well-heeled” (in his words) opponents would rip past the bus in swanky motorcars but their wickets were ripped by him later in the day!

Few batsmen who fell victim to the unlikely assassin will forget the sight of him trotting in from a mere eight or so paces behind the bowler’s stumps where he’d take aim at the right-hander with a sharp slant and notable dip in flight; and seemingly without a change of action, Daya Sahabandu would ram in a bouncer!

Many a batsman who should’ve had Daya on friendly terms would discover to their dismay that he was subversive and could undermine their confidence. Tom Graveney was one such doyen of batsmanship who came to admire – and even anticipate with no small degree of anxiety – the hidden talents of this “unassuming friendly character.”

Despite such accolades, Daya had little opportunity to shine in international games; he featured in only 18 first-class fixtures, taking 87 scalps. But those victims included Graveney himself in addition to Keith Fletcher on Sahabandu’s debut in 1969, as well as the likes of Ian Chappell, Ian Redpath and Keith Stackpole in Bill Lawry’s Australian side later the same year.

Signs of life were precisely what the deceptively laid-back Daya would display in first division cricket. In 253 matches spanning nearly 20 seasons, Sahabandu bowled in excess of 6,550 overs to take 1,048 wickets at an astounding average of slightly above 14.

And in Gopalan Trophy matches, his tally of wickets was as impressive. Playing for the Board President’s XI against the State Bank of India, Sahabandu turned in a match bag of 7 for 77. A tussle with Ajit Wadekar’s XI in 1975 ensued, and he won the day with another heady match bag of 8 for 112.

Indeed, Daya Sahabandu bowled brilliantly on placid wickets, and struck with unexpected accuracy whenever he led the bowling attack.

Daya Sahabandu’s wicket taking streak goes as far back as his schooldays where bowling for Royal’s First XI from 1957 to 1960, he once scooped a match bag of 5 for 78. Go farther back in time to his primary school days, and you’d find that he opened the bowling for Royal. Later too, he would open the bowling and then dextrously switch to spin when the track showed no sign of life for pacies – a rare talent that benefitted his country in his day.