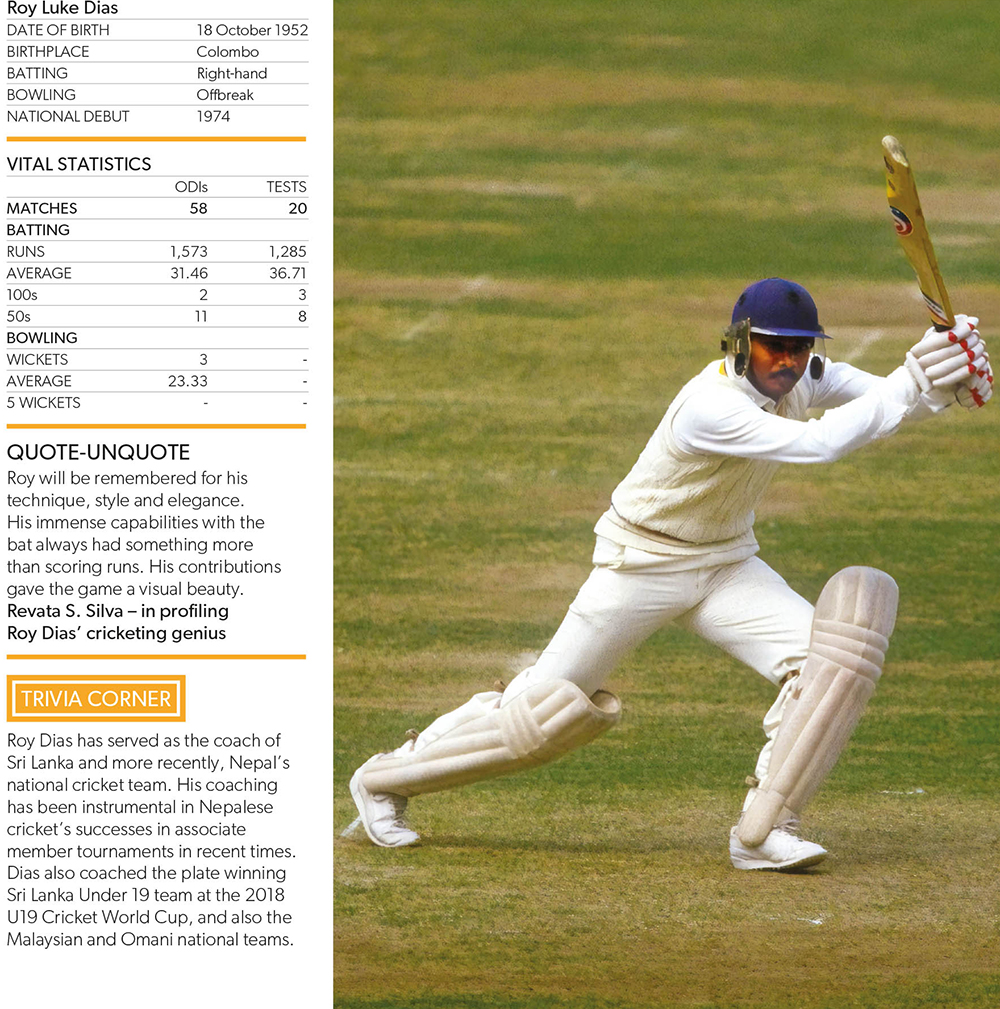 Like the boy who stood on the burning deck, some men are the epitome of calmness and composure. Roy Dias did more than stand at the crease; he stood tall and delivered. Those who saw him face a devastating Pakistani attack in 1981/82 likened Dias to a lone Atlas shouldering the burden of the nation.

But with typical modesty of a man capable of batting with great aplomb, the graceful batsman may well have said that all he did was play the moving ball well enough.

A Peterite schoolboy, the grownup at the batting crease came to embody a technically perfect style that bestowed on the gentlemen’s game a gracious footing and visual elegance in stroke play. If there was a gap in the field – even the smallest chink in the fielding side’s armour – Dias would find it. And there was the glory of his footwork and wristy dexterity to cut or drive the red cherry to glory.

His ability to stand and deliver showed early promise. A sterling 214 runs in the 1979 CC Trophy came in four matches with a titanic average of 71 plus. This qualified the oft dwarfed island side for the 1979 World Cup and Dias’ carefully crafted 50 took his team to 238 for 5, which was capped by bowling India out for a paltry 191.

The stylish right-hand batsman was a vital cog in the Sri Lankan Test side for 20 matches and not surprisingly went on to become the first islander to score 1,000 runs in the longer version of the game.

Ironically – for cricket is a game of life’s little paradoxes – this titan of a run making machine had the most inauspicious of entries into the major league. In the year that Sri Lanka gained Test status, Dias was a natural selection to play in the inaugural encounter. As Sri Lanka’s vice captain and together with his indomitable skipper Duleep Mendis, he formed the backbone of the batting. And while his partner volleyed and thundered away at the other end, Dias kept a cool head and was a delight to behold with his impeccable sense of timing and a panoply of orthodox strokes.

His 295 runs (at an average of nearly 50) on what was a memorable tour of Pakistan – he scored 98 in Faisalabad and 109 in Lahore – demonstrated the ethos of a boy standing on the burning deck. With the top order going to blazes all around him, Roy Dias held his own against a blistering pace attack led by none other than Imran Khan.

And then there was the acme of his ability to save the day. Playing neighbouring India on home soil, Dias made a signature contribution to engineer Sri Lanka’s maiden Test win as well as its first series victory in 1985/86. Dashing yet decisive twin 50s in the second Test set the stage for a famous triumph, and a determined but devil-may-care century in the last game when the Sri Lankans were facing defeat ensured a draw.

He once said that “cricket has earned me good friends and the association of top people the world over. Some of them are now knights.” For fans here in Sri Lanka, he was a cricketing knight.

When Sri Lanka was promoted to Test status, Roy Dias was picked for the first Test – and a rude inauguration awaited him when he was dismissed for a duck by a Bob Willis thunderbolt. But bravery was to follow: the lionhearted batting prodigy stroked his way back into contention with a fluent 77 in the second innings.