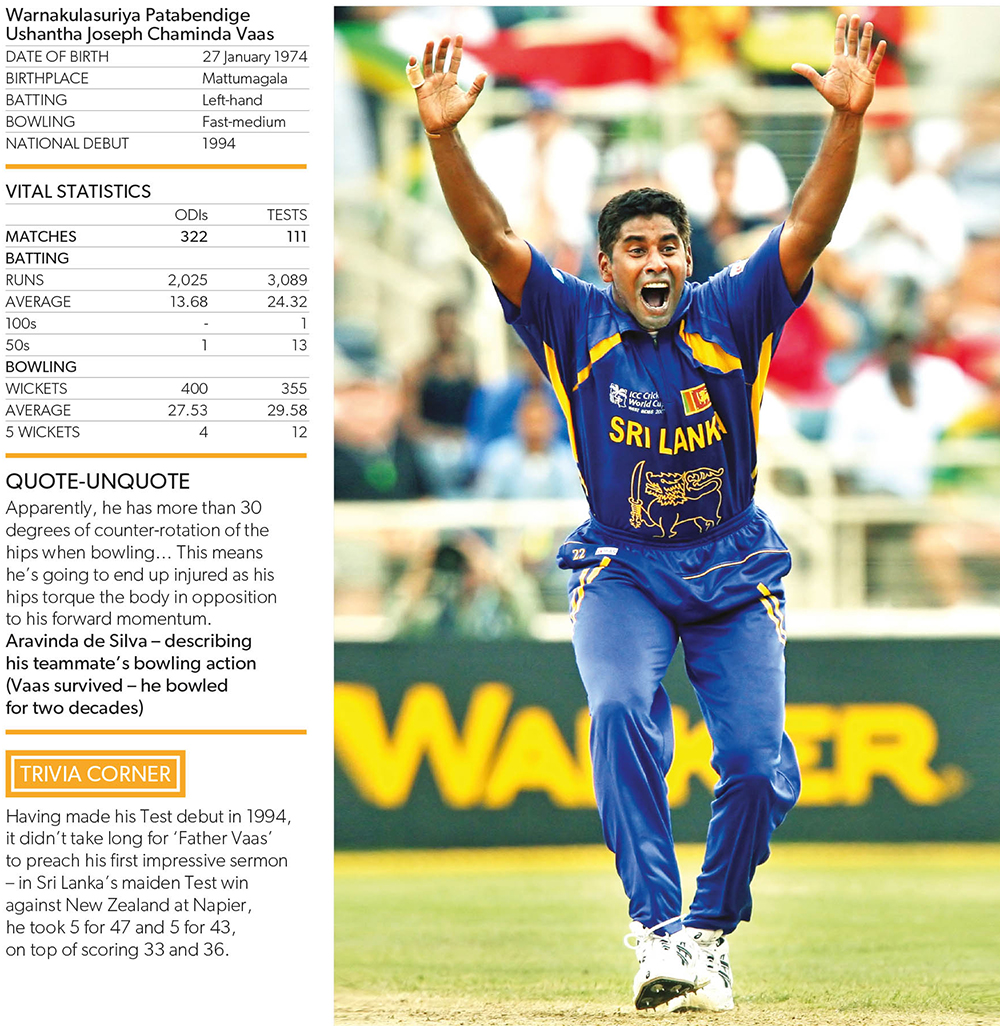 As a young man, he contemplated entering priesthood knowing full well that it would call for a decade or more of diligent study. Maybe this was around the time that he heard God’s calling… to be a fast bowler. So cricket was to become a theology in itself for Chaminda Vaas.

A strict Roman Catholic, Chaminda Vaas was known to pray before every game. He intended to become a priest in his youth but believed that God wanted him to play cricket instead: “I seriously considered going into the priesthood, which would have meant 12-14 years of study. But then cricket began to take over;

I think God created me as a cricketer so I’m happy that it was my calling.”

Vaas applied himself with Catholic vigour, diligently studying the world’s best seamers – and studying their religion. Wasim Akram among others was witness to the youthful acolyte with ambitions to become the ‘pope of pacies.’

But one wonders whether ‘Brother Chaminda’ realised that his creator may not have wanted human beings to bowl as hard, long and fast as he did… and survive? To do so for a year or a season would be marvellous given the body dynamics of quicks. That he bowled for 20 years is divine handiwork – a miracle perhaps?

Chaminda Vaas was heavenly to watch. A left-arm swing bowler who was almost always on the spot. As well as bowling consistent line and length, he was “accurate, nagging and hard to get away,” as one commentator noted. In his early days, the cannonball Chaminda impressed cricket watchers with the rate of knots at which he delivered the red cherry. From thereon, he was consistently at the head of the Sri Lankan cavalry’s light brigade although Vaas’ pace dropped as his cricketing life progressed.

As age customarily withered pace, his infinite variety didn’t suffer; he simply added a notorious in-swinger and deceptive off-cutter to his deadly armoury. On dry dusty subcontinental pitches as much as green grassy turfs, this mantra blessed him with 355 Test and 400 ODI wickets. In fact, he’s been called ‘Sri Lanka’s Glenn McGrath.’

Be that as it may, comparisons are odious – Chaminda is a unique character; a priest of pace in his own parish as well as away.

He was in the famous side that snatched the 1996 Cricket World Cup from the mighty Aussies in Lahore. He took 26 wickets to secure a series win at home against the Windies in 2001/02. And in the 2003 Cricket World Cup in South Africa, Vaas skittled 23 victims to become the leading wicket taker of the championship.

Predictably, Chaminda Vaas went on to become the most penetrative and successful new ball bowler Sri Lanka has produced, the youngest to take 300 ODI wickets, the holder of a record for the best bowling figures in ODIs and the only bowler to take an eight wicket haul in the short form of the game.

Not surprisingly for a man of faith who takes his calling seriously, Vaas could more than bat a little. A lower order batsman of some repute, he scored over 3,000 Test runs including a century and 13 half tons.

One of his remarkable innings was as a tail ender in the 2006 Test series against England where with Nuwan Kulasekara, he defended the ninth wicket in a rain interrupted game to force a draw.

Should you study the scriptures known as ‘record books,’ you’d know the sacred texts reveal that Vaas holds the record for the best bowling performance in ODIs with a divine judgement of 8 for 19 off eight overs against Zimbabwe in December 2001.

And those who sing hosannas to him can only add ‘amen’ and a hallelujah chorus to the spiritual calling of a superlative cricketer who studied the gentlemen’s game religiously – to his and Sri Lanka’s everlasting benefit.

Prophetically for the type of record-breaking wicket taker he was to become, Chaminda Vaas traced his once and future trajectory by taking 6 for 25 in the same tournament, which included a hat trick in his first three deliveries – the first such feat in international cricket. And as a spate of injuries sidelined him at regular intervals, Vaas shortened his run-up and cut his pace so that he could prolong a career that showcased an undeniable passion for the gentlemen’s game.