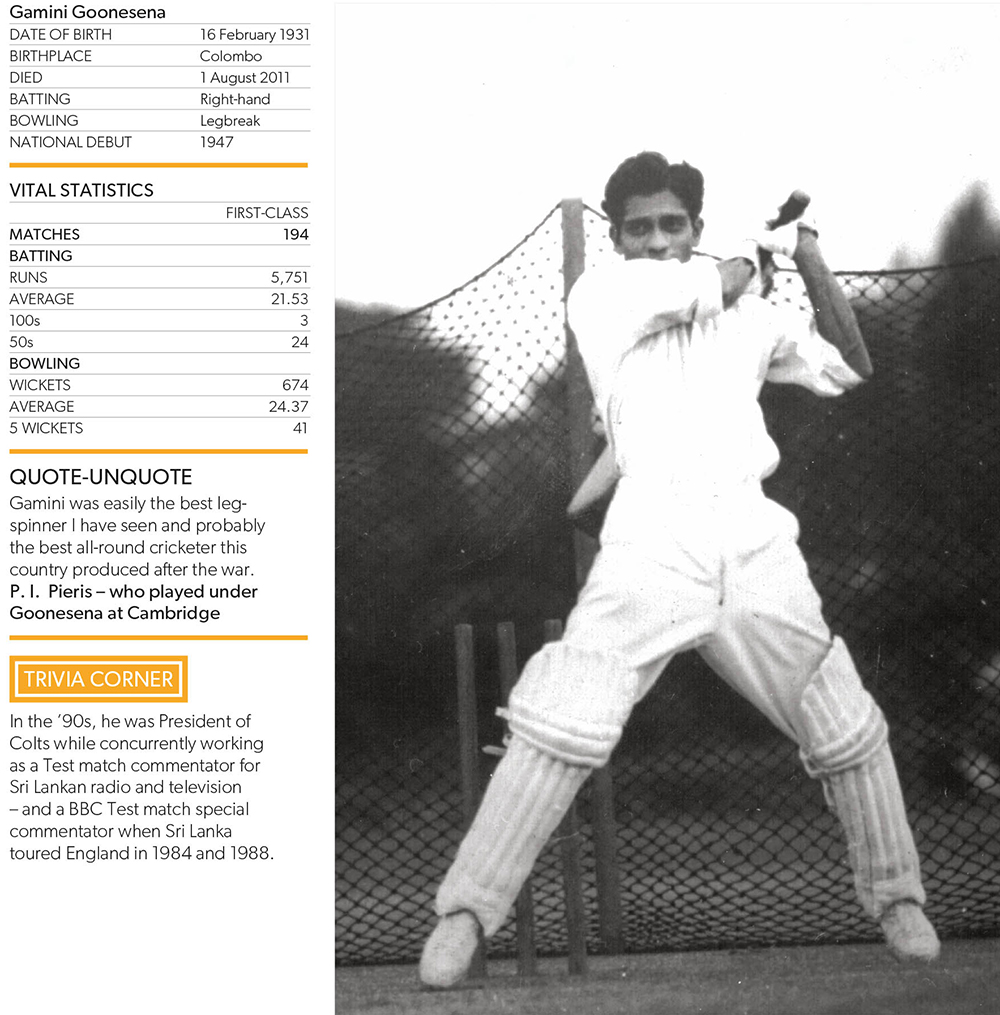 The thing about being genuinely gifted is that it often takes a truly insightful talent scout to spot you. The young Gamini Goonesena was fortunate to be noticed by the beholding Royal coach F. C. de Saram (a.k.a. ‘FC’). In fact, it was Royal’s fortune and later Ceylon’s that FC picked him – at the time, a mere practice bowler at the nets – to make his debut in the ‘Big Match’… the next weekend!

Urban legends are made of these.

So there was young Gamini, a novice in the side but no tyro to bowling. He made his maiden impression with 4 for 46 by leaving a trail of broken stumps in the second innings, to empower Royal to cruise to a nine wicket win over their traditional rivals. And as if to prove de Saram’s hunch, Gamini turned in a match bag of 10 for 80 in the 1948 encounter, affirming his coach’s intuition and announcing his own intentions.

From being thrown into the deep end, Goonesena went on to showcase his early promise in the most certain of terms. Booking a berth in 52 matches for Cambridge from 1954 to 1957, he blazed a trail in his final year as the first Asian cricketer to captain the prestigious university team. While at uni, he was the only Oxbridge player to have scored over 2,000 runs (2,309) and taken 200 wickets (208) in first-class cricket – the highest by a Cambridge player at the time.

As if to prove his credentials as Ceylon’s renaissance man in England, Goonesena not only notched up 211 in 1957 – to date, the highest individual score by a Cantabrigian in a university match – but also took 4 for 40 against Oxford to seal a Cambridge victory by an innings and 186 runs. This too was one for the record books, being the largest margin by which any varsity side has won the traditional Oxbridge encounter since 1827.

There are other feats outside the university circuit that set him apart. For instance, he completed the double of 1,000 runs and 100 wickets in a single season while playing for Nottinghamshire.

Back at home, Goonesena continued to underscore what FC had spotted many moons earlier. Not only was he widely recognised as a gifted all-rounder – a debonair right-hand bat who bowled deceptive legbreaks and googlies – but showcased his talent over a span of 19 years while representing no less than 14 teams.

In the eyes of his peers, he was par excellence: charming, charismatic, methodical and meticulous. He had an enviable cricket brain and as a captain, stood head and shoulders above his contemporaries in England; he always led from the front – be it while bowling, batting or fielding. “Gamini would throw himself totally into the game and never gave up,” is how his Cambridge teammate P. I. Pieris described him.

Over the years, Gamini Goonesena served the cause of cricket as a man who wore many hats. In 1965, he was Ceylon’s representative at the ICC’s International Cricket Conference. The next year, he was appointed the country’s representative to the International Cricket Council (ICC). In-between, he found the time to play club cricket in Sydney in the 1970s.

And when our island nation gained Test status in 1981, Goonesena represented the country in Australia. Later, he managed the Sri Lankan Test side on its tour of India – he was indeed a knowledgeable player and an efficient administrator.

Being “a lovable character, a fine human being and undoubtedly one of the best or even the best leg-spinner that Sri Lanka has ever produced,” as a commentator once said, puts him firmly in the profile of a renaissance man.

On leaving school, the young Gamini Goonesena joined the Royal Air Force in Cranwell in England as a trainee jet pilot but abandoned this career opportunity to play county cricket for Nottinghamshire as a professional – such was the lion’s passion for the gentlemen’s game.