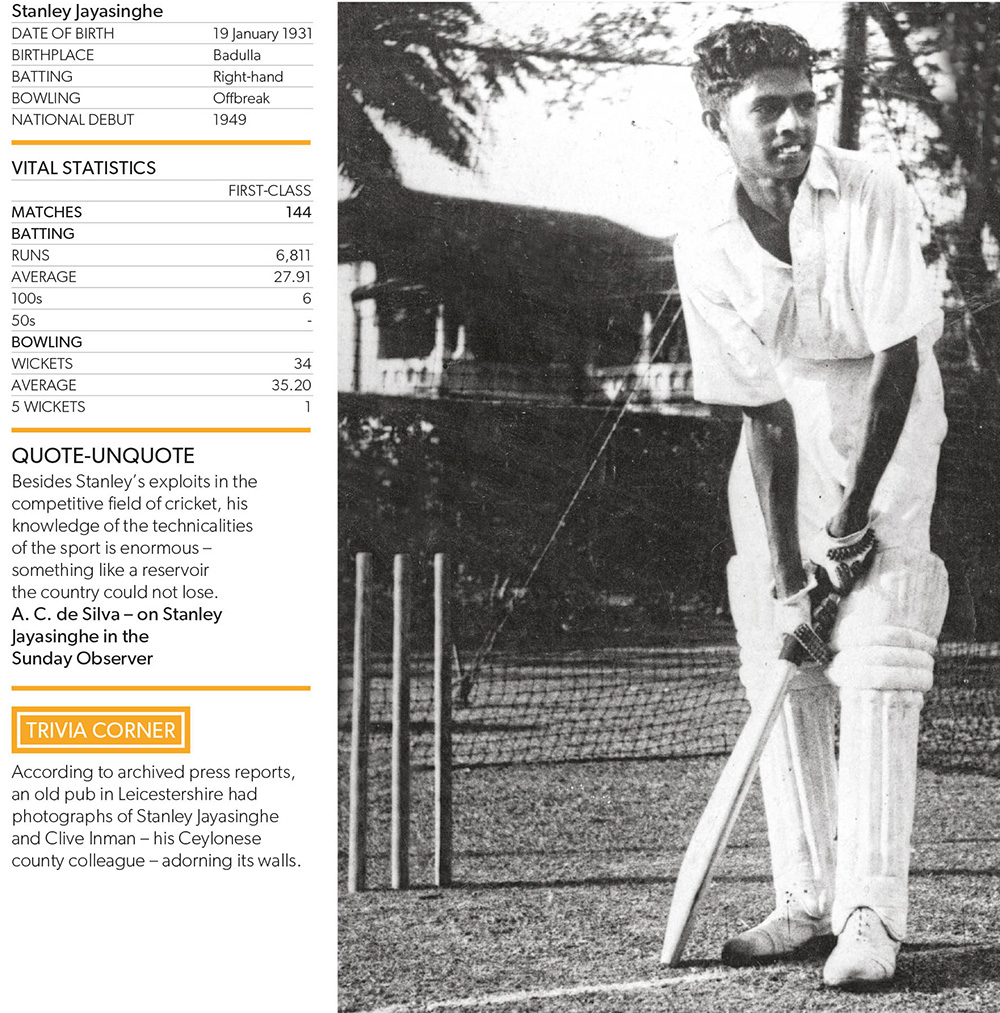 There’s a time out of mind that the average individual – if he or she is representative of the human impulse – will populate with gods and heroes. This is an age of myth and legend about which little if anything is known. The conventional wisdom however, is that anyone who has lived and breathed in such an era must be the stuff that supermen are made of.

So it is in the world of cricket in the epoch before our small island nation received its name or either Test and ODI status.

Into such an age was born Stanley Jayasinghe. His birth took place in the salubrious climes of Badulla in the same year that Ceylon demonstrated its democratic ethos by granting its citizens universal adult franchise.

Women may not have been able to play the glorious game of cricket in that age but at least they could vote. Bliss it was that dawn to be alive – to be young in a republic untouched by war, revolt, rebellion, insurgency or political crises of any sort was heavenly.

Despite his origins in the Uva Province, the young Stanley was educated at Nalanda in Ceylon’s then capital Colombo.

Stanley shone even as a schoolboy cricketer and captained Nalanda in 1951, three years after Ceylon gained independence from the empire that taught the island’s sons the gentlemen’s game. He was a gifted right-handed batsman in addition to being a part-time offbreak bowler.

Among his fellow Nalandians who also went on to represent the former British colony at cricket were erstwhile All Ceylon and NCC player Carl Obeysekera, and Ashley de Silva.

Nalanda set a record when three of its schoolboys were included in the Ceylon squad. These were none other than Jayasinghe’s Nalandian contemporaries – Obeysekera (who starred as Ceylon ’s opening batsman), Ashley de Silva (12th man) and ‘the great Stanley Jayasinghe’ as the record books remember him.

Since the pioneering appearance of Jayasinghe together with Obeysekera and de Silva who blazed a trail for their alma mater, more than 20 Nalandians have worn the lion cap on their crowns.

Jayasinghe brought glory not only to Nalanda but also his little island nation by being more than ‘good enough’ as the saying goes to be selected to play for an English county side although his foray to England was to work as a tea taster.

Those who knew him will surely attest to his brilliance as a batsman. Again, being from an age where televising fixtures and capturing memorable moments on smartphones were yet to come into play, it is the archives that record Jayasinghe’s stint with Leicestershire where he played with distinction alongside another famous son of the soil in Clive Inman who scored the fastest 50 in county cricket at the time.

Jayasinghe’s first-class cricket career took off in the 1949/50 season and he not only represented but also led Ceylon in the field. He hung up his boots at the end of the 1968/69 season. Jayasinghe was also a one time member of the national selection committee and manager of the Sri Lanka cricket team.

Some half a century following his retirement, Stanley Jayasinghe was one of 49 former Ceylon and Sri Lanka cricketers felicitated by Sri Lanka Cricket in September 2018. The intention was to honour them for their services to their nation before the cricket crazy nation became a full member of the International Cricket Council (ICC).

Following a successful stint in county cricket with Leicestershire, Stanley Jayasinghe was appointed Ceylon’s national coach. An outspoken personality, he unequivocally told the then sports minister what was what and where to get off – and that managing and coaching the team were his exclusive prerogatives. That procla­mation ended Jayasinghe’s tenure but sealed his reputation as a sportsman – someone whose love for the game was such that he took on the dual roles of manager and coach after retiring from playing the game.