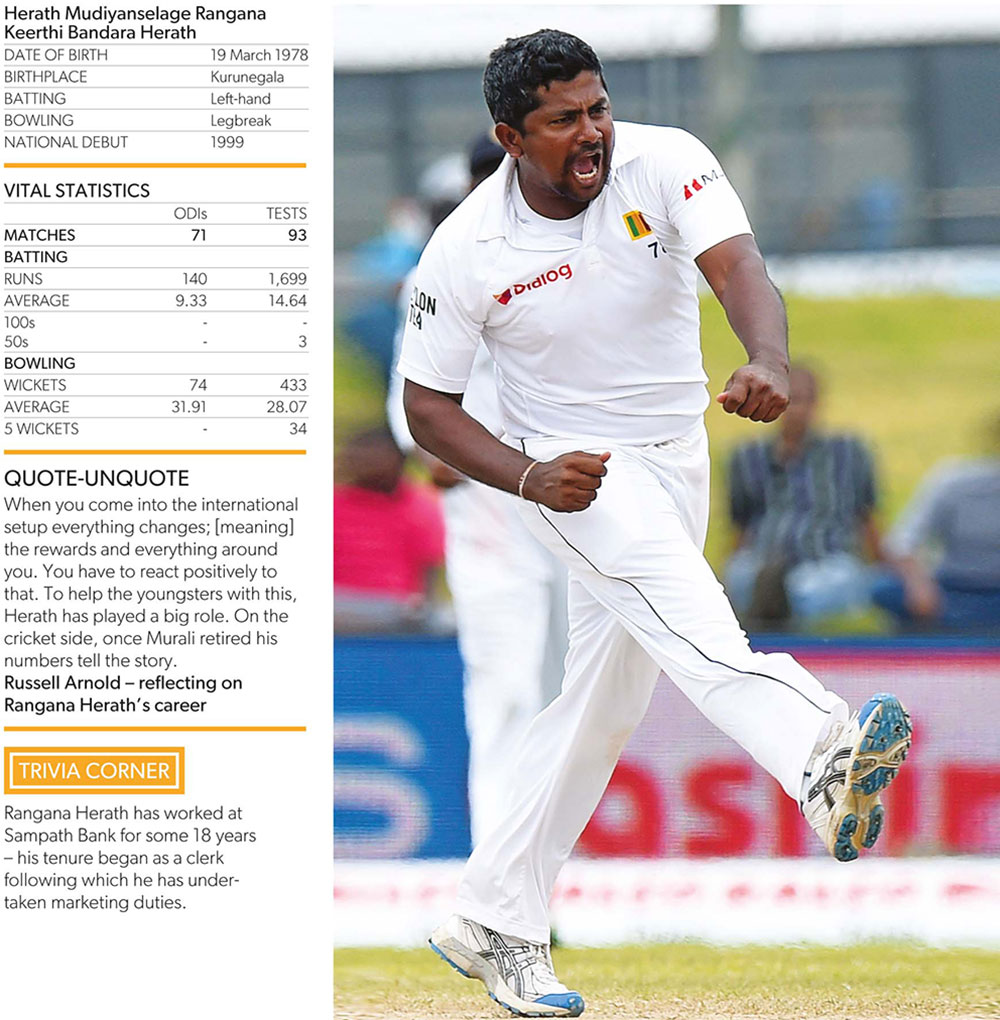 Malinga would roar. Murali would implore with his saucer eyes. And then there was the quiet achiever – a magician who would turn on his heel after a delivery that had the batsman at the other end in a quandary, backpedalling towards the victim and holding out his arms like a windmill harvesting the breeze.

But one had the sense that he’d never go into histrionics. If a batsman was plumb out, he would get the ‘Herath treatment.’ But when Rangana himself felt he had to walk – even he was at the crease with a match to save, mind you – he’d do so to his opponents’ delight… and teammates’ dismay.

This level of integrity – indeed, some may call it idiocy – isn’t a characteristic of A-listers.

Rangana Herath more often than not paid the price for his quiet approach to the gentlemen’s game – and too often, he was overlooked by selectors who undervalued his efficient magic. But when his inclusion in a Sri Lankan side produced the goods and bamboozled batsmen’s wickets fell like ninepins, those in his corner could nod sagely at the voodoo work done.

A practitioner of the mystical art of flight and dip, Herath made his craft look deceptively simple – he eked out precious little deviation and less surprises than one might expect from a master craftsman.

And like any serious magician, this spin wizard was reticent about sharing the secrets of his dazzling craft. “I tried to put the ball in the right spot,” he might essay, self-deprecatingly. But on stage as it were, Herath had all the razzle-dazzle of the performer; he drew batsmen to their doom with what seemed like deliberately restrained movement even for the round-arm ball that drifted.

In a career spanning 17 years, Herath was capped in 93 Tests. This seems a trifle underrepresented for a former Sri Lankan skipper who is the most successful left arm bowler in the Test version of the game with 433 scalps to show for it – the first southpaw to take more than 400 wickets in Test cricket.

He also holds the record for being only the third bowler in cricket history to take five wicket hauls against all Test playing countries. And Galle – where Herath bagged 100 wickets, becoming the third bowler to do so at a single venue – was his happy hunting ground. The picturesque stadium was also the stage for his swan song, for Herath handed his magic potion over at the end of that game.

But that wasn’t before he’d played county cricket for Surrey and Hampshire. And yes, he did inherit the mantle of that past master of spin Murali, after all. Long casting spells in the great witch doctor’s shadow, this shaman came into his own with a mystery ball – the one that darts the other way, so to speak.

With early promise portending the magic to come – an impressive A team tour to England that got him into the national side, six Test wickets at home against the visiting Aussies in two matches and as many as 15 in three against Pakistan at home, Herath was set to run a long spellbinding cricketing career.

What’s more, these feats were to pale in comparison to later spells. Witness a nine wicket match bag against South Africa away to spearhead his side to win their first Test there; bagging 12 scalps (6 for 74 and 6 for 97) in the first Test of the 2012 series in England; a memorable ICC World Twenty20 in 2014 with five wickets at a mystifying three runs apiece; 9 for 127 against Pakistan; and four wickets against the Windies in 2015 for Sri Lanka.

Rangana Herath said on his retirement that “it’s been a privilege and honour to play for my country because we have 22 million people so very few get the opportunity to play for Sri Lanka … that’s an honour for any player.” Which is why there’s no guessing why he is revered by cricket fans – above all, for his inner greatness.