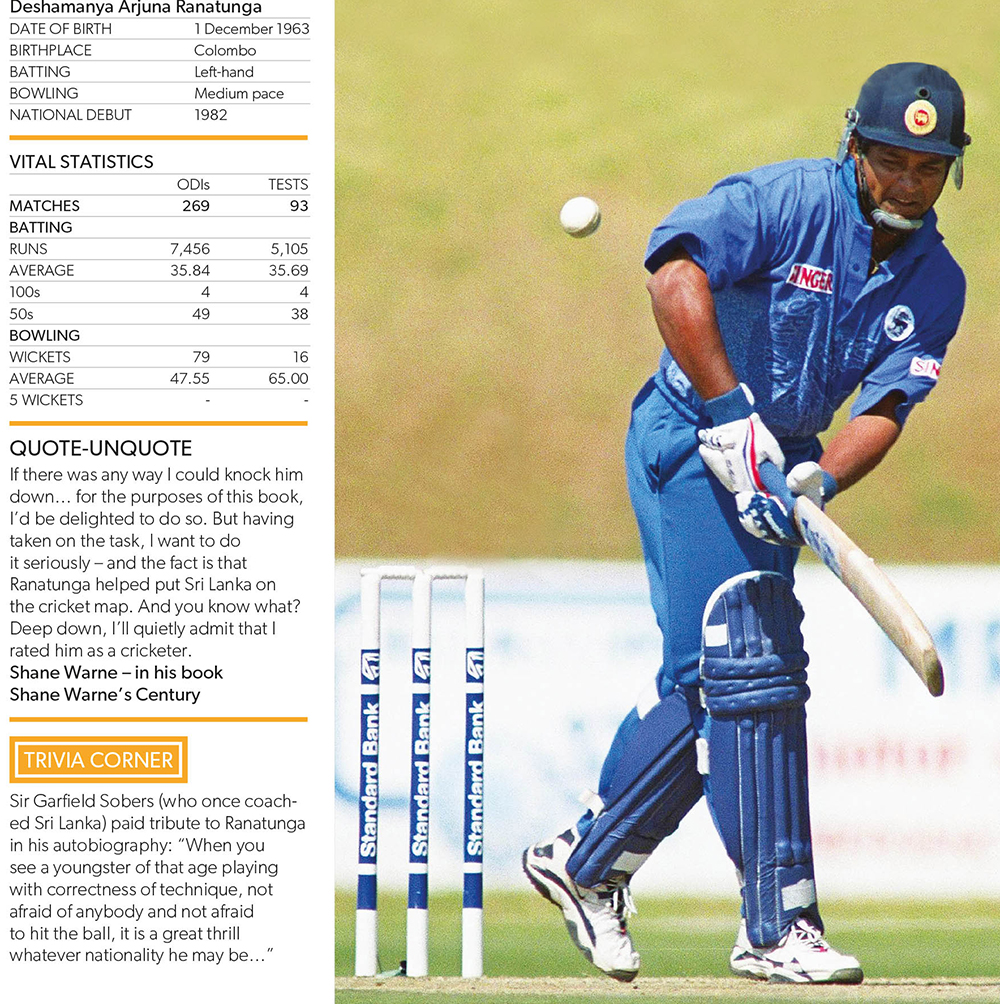 Making his debut in Sri Lanka’s inaugural Test at the tender age of 18, Arjuna Ranatunga scored its first Test half-century. A dominant figure on cricketing arenas the world over for two decades thereafter, he never shied away from confrontation – especially if his players were wronged.

Ranatunga was named Sri Lanka’s captain in 1988 and led the national side for the next 11 years. And he has been saluted and credited for playing a key role in transforming Sri Lankan cricket from being talented but oft beaten into a competitive side that could win games – and even a World Cup!

Indeed, the Ranatunga era saw Sri Lanka rise from being tagged as underdogs to the game’s dark horses and eventually, to cricketing thoroughbreds and that historic ICC Cricket World Cup victory in 1996. Arjuna’s captaincy was impatient and innovative, while his tactics and strategies – controversial though they may have been at times – were commended by elders and experts, and emulated by others.

For example, he was the brains behind going for the jugular in the first power play (15 overs at the time), which took the ODI game by the scruff of the neck – with more than a little help from the likes of Sanath Jayasuriya and Romesh Kaluwitharana – and set a new trend in the ODI game plan.

Then there’s that business of being unusually portly for a sportsman. For there’s no denying that Arjuna at his best was what the cricketing almanacs describe as ‘stockily built’ – a kind euphemism for tipping the scales at overweight if not obese. He was notorious for his inability to scamper the quick single even in the shorter format of the game. In fact, there were occasions when he would walk a run!

At a hardly imposing height of 5’ 8’’ and weighing in at 90 kg, tubby Ranatunga looked like he was in need of a rest rather than a bout of strenuous exercise! But no amount of calumny can detract from his uncanny ability to keep the scoreboard ticking. He drove with great aplomb through the offside, which was his go-to stroke.

For all his ostensible unfitness (he once controversially called for a runner during a long innings), Rana­tunga is remembered by his legion of fans as a swashbuckling batsman. He holds the record for the most number of runs (4,675) scored by any batsman in ODI history at No. 5 and was also the first to surpass 4,500 runs in that slot in the shorter version of the game.

In an interview with The Island in 2011, Ranatunga revealed: “As a captain, I wanted people who would give 100 percent for the team. There were cricketers who were really talented but they never played for the team. When they were dropped, I told the selectors to give me players who play for the team rather than go for records…”

Arjuna Ranatunga was picked as one of five Wisden Cricketers of the Year for 1999 not long after losing the captaincy. Following his exit from international cricket, he followed in his father’s footsteps to enter politics and eventually gain a cabinet portfolio.

If you watched the Sri Lankans cruise to victory in that epic final against the Aussies under lights, on that night to remember in Lahore’s Gaddafi Stadium on 17 March 1996, the moment when ‘captain cool’ raised the ICC Cricket World Cup trophy will be etched in your mind forever. ‘Arjuna and the boys,’ as they were known, did us mighty proud.

Arjuna Ranatunga is fondly remembered for his stand in a One-Day game against England when Australian umpire Ross Emerson called Muttiah Muralitharan for throwing. Having exchanged words with Emerson, the skipper led his team off the field – much to the delight of Sri Lankan fans across the seas. His fighting spirit in defence of Murali is legendary.