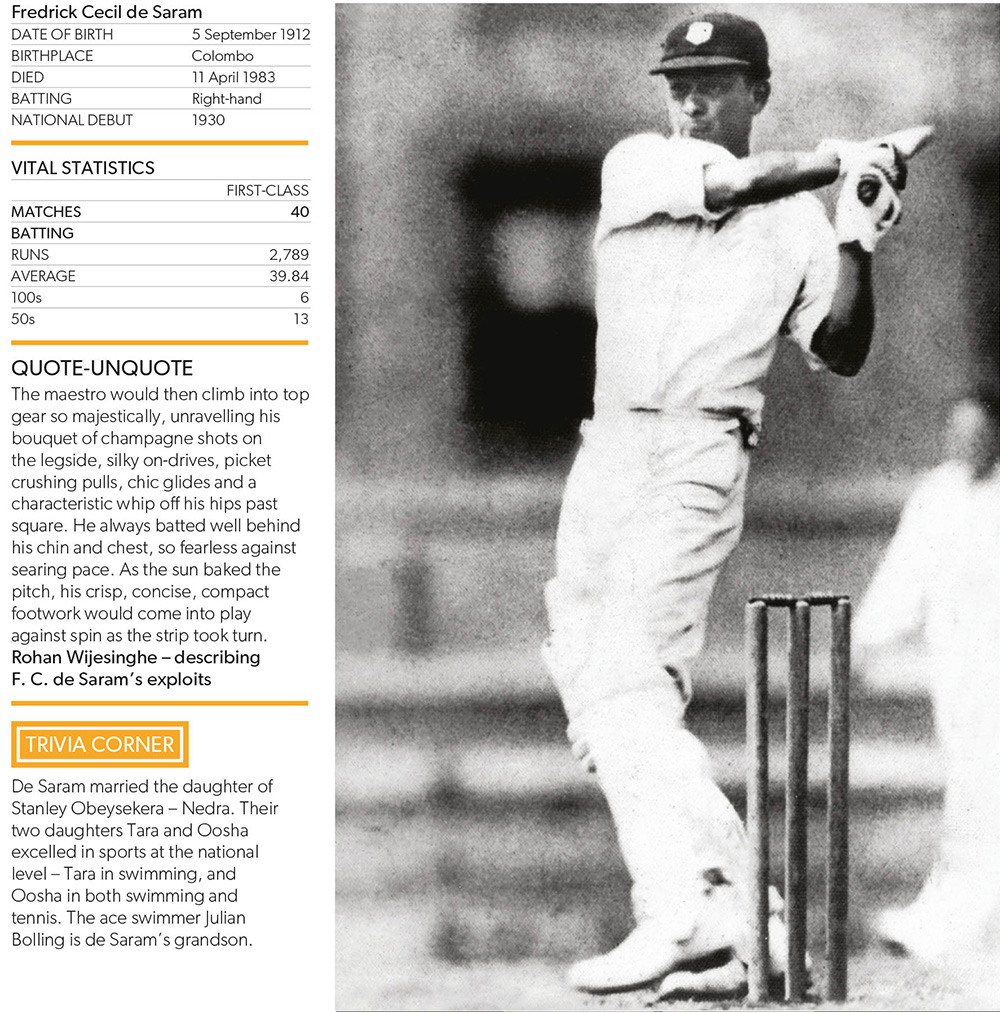 There are giants who sit on their world like a colossus and will not be moved. Col. Fredrick (‘Derrick’) Cecil de Saram – a lawyer and officer of the Ceylon Army with an OBE for his gallantry under fire – was one such iconic individual. That he played cricket for Royal and captained Ceylon seems almost an aside in an otherwise colourful life.

De Saram’s pugnacious personality ruled every roost that was privileged to experience his domineering presence. One chronicler characterised him as “arguably the most opinionated Royalist to have drawn breath,” adding for good measure that “his characteristically colourful and robust language delighted his acquaintances, and no doubt made [many] blush.”

Whatever label one might tag him with – take your pick from ‘aristocratic’ and ‘arrogant,’ to ‘blunt’ and ‘brutal’ – there’s no denying that ‘the Colonel’ cut a swathe through whomever or whatever he encountered.

Many might have cringed at his very appearance on the scene while others regarded him with a sneaking affection no less dimmed by the fact that he was something of a martinet. That he led the attempted military coup of 1962 only adds to his stature as a unique character – one who would not bow down before anyone but rather, do the cowing himself.

So what of his cricketing prowess?

A right-handed batsman, de Saram scored 128 for Oxford against the touring Australian side in 1934 that included the likes of Grimmett, McCabe and Fleetwood-Smith. And he totted up 2,789 runs (at an average of nearly 40) featuring six centuries and a top score of 208 in 40 first-class matches, for Ceylon and Oxford.

De Saram captained his country with distinction from 1949 to 1954. To those who knew him intimately, this might seem quite a trite synopsis of a rather more scintillating career!

Let another narrator – Rohan Wijesinghe, the chroni­cler cited above – paint a less mundane picture of de Saram’s halcyon days: “Schoolboy score books bursting with his runs and deeds, Derrick went on to skipper Royal College in 1930. De Saram signed off at school as their head prefect besides having captained them at tennis, rugby and football as well.”

At Royal, de Saram was head prefect and school cricket captain. He played in four Royal-Thomians – and in the last of them, as skipper in 1931, the all-rounder (admittedly, his fielding was somewhat suspect) scored 140 and took 6 for 52 in the Thomian second innings.

At Oxford University’s Keble College, he was no less prone to make an impression, earning blues in cricket (while captaining, to boot) and tennis, and a half-blue in golf. Upon his retirement, de Saram coached Royal at cricket – not forsaking ‘big match’ rivals S. Thomas’ College, for which doughty endeavours he was conferred the status of ‘honorary Thomian.’

De Saram was also reputedly a pro with a brilliant game of billiards in his pocket.

This cricketer, administrator, selector, coach and lawyer par excellence was the Grand Old Man of Ceylon cricket. He retired from the game in 1960 after dedi­cating half a century of his life to a passionate pursuit.

Trained at Sandhurst, the Colonel proved his mettle in the army as the officer commanding the artillery garrison that defended civilians against Japanese fighter planes, which attacked Ceylon in April 1942. He personally commanded an ack-ack battery that provided aerial defence for Trincomalee. Whether he fired ordnance or ornery expletives at the Zeros, Britain saw fit to award him an OBE for his bravery under fire.