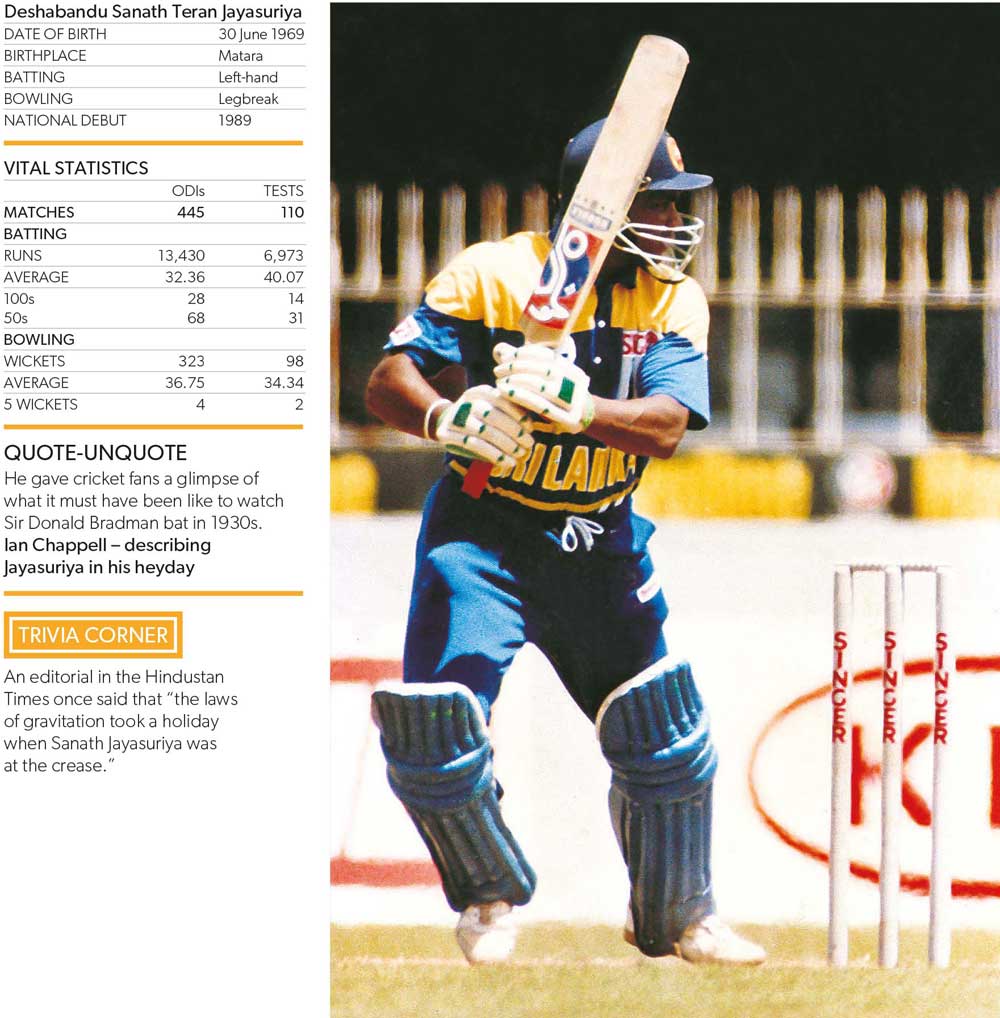 There’s a popular children’s ditty that goes “Kookaburra sits in the old gum tree/Merry, merry king of the woods is he…” And in the adults’ entertainment section, the king who wielded a Kookaburra bat was the swashbuckling Sanath Jayasuriya.

Known – nay, feared and revered – for his powerful batting, savage strike rate and explosive ability to turn a match on its head, ‘Sana’ taking guard often came across to his fans and opponents alike as a monarch of all he surveyed.

It’s an impression borne out by his Indian counterpart and master batsman Sachin Tendulkar: “I haven’t seen Don Bradman bat; but I’ve seen Sanath Jayasuriya – and I haven’t seen a better batsman in my cricketing career.”

While Arjuna Ranatunga and Dav Whatmore deserve the credit for planning strategy in the mid-1990s, it was their lieutenants Sanath and compatriot Romesh Kaluwitharana who so spectacularly delivered the game changing goods – a game changing plan that soon became the norm for any side on top of an ODI game.

The maiden outing of this innovative strategy was a corker to watch. And it wasn’t during the 1996 Cricket World Cup as many tyros surmise but rather, in the Sri Lankans’ preceding tour of Australia. Once again, Jayasuriya’s partner in crime was the diminutive dynamo Kaluwitharana, and the pair took perverse pleasure in despatching the crestfallen Aussie bowlers to every corner of each and every quadrant!

“When Sanath and Kalu were batting, we didn’t want to get up for a cup of tea. All I remember wanting to do was to sit there and watch them bat,” said teammate Upul Chandana at the time.

This was a novel yet potentially match winning game plan, which the duo put into action especially in the preliminary rounds of the Word Cup the following year to stun the cricket playing world into parting with the coveted trophy.

To say that Sanath could also ‘bowl a bit’ is as blasé as it is to say he’s simply the ‘danger man’ at the crease. In fact, being the only player to amass over 12,000 runs and take over 300 wickets in ODIs led him to be regarded as one of the best all-rounders in the history of limited overs cricket in a dazzling career spanning two decades. A left-arm orthodox spinner with a rapid over rate, he also bowled the faster ball and yorker with a quick arm action, taking 440 wickets with six ‘five fors.’

Jayasuriya’s best was 6 for 29 against England in an ODI (1993) and 9 for 74 against Zimbabwe in Tests. One of his more memorable outings was in the semi-final of the 1996 Cricket World Cup when he took 3 for 12 runs in 7 overs. True to form as an all-rounder, he bagged 27 wickets in World Cups altogether including 10 in the 2003 edition.

When you’re king of the hill, you set records: Jayasuriya is the only batsman to score over 10,000 ODI runs with a career strike rate exceeding 90 – the king of ODIs indeed, and retired prince of a small Test cricket playing island.

Sanath Jayasuriya was the Most Valuable Player of the 1996 Cricket World Cup and the bible of cricketing lore – the Wisden Cricketers’ Almanack – dispensed with a hallowed tradition by naming the superstar as one of five Cricketers of the Year in 1997 despite him not playing the previous season in England.

He also captained his country from 1999 to 2003 and went on to serve Sri Lanka Cricket as Chairman of selectors – in fact, Sri Lanka won the ICC World Twenty20 for the first time in 2014 under his tenancy as chief selector.

As Sunil Gavaskar once reportedly said: “Sanath Jayasuriya – there is something about that name…”

Believe it or not, Sanath Jayasuriya’s entry into Sri Lanka’s Test team was as a middle order batsman who could bowl a bit; but it was his promotion to bat at the top of the order that opened the floodgates so to speak – and this transformation was to extend to the shorter versions of the game where he stunned the world of cricket with his power hitting. Opening the innings therefore, saw him discover an inner strength that produced a brand of batting not seen before.