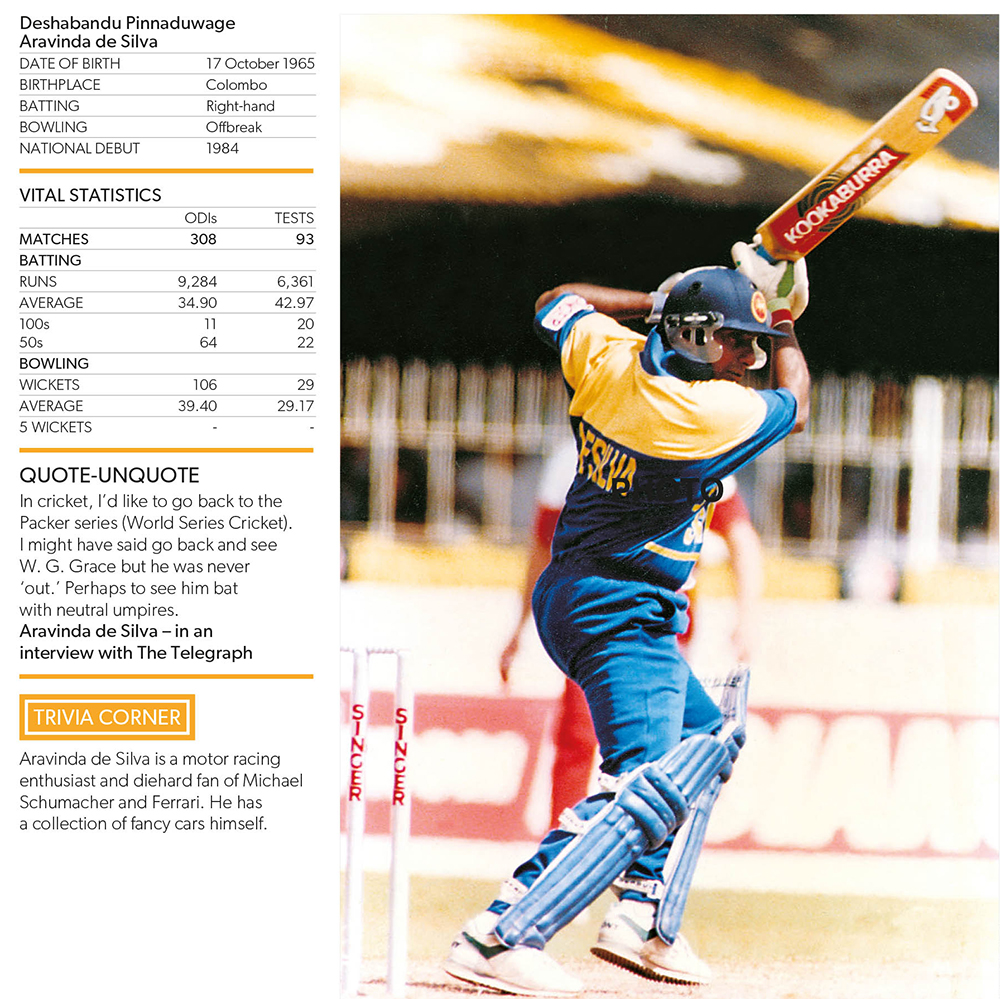 Urban legends often have a smidgen of truth to them. The one about pocket Hercules Aravinda de Silva concerns a narrative about how Abu Fuard, one of the cleverest off-spinners Sri Lanka has produced, saw his potential at an early age. The former tested the latter’s ability to spot and hit the ball out of sight – in this case, by throwing a tennis ball at him.

So tennis’ loss was cricket’s gain; and a not unduly enthusiastic commentator might even suggest that ‘Ara’ was a prince of a small cricketing island but only as far as a kingly game was concerned.

Contrary to what poets might say in real life as in cricket, the man is father to the child. Ara’s dad Sam de Silva was the first and greatest motivation in the young cricketer’s childhood. And as a young adult, the batting dynamo would become noted if not notorious for his love of fast cars that roar like a lion.

A product of Isipathana and D. S. Senanayake, Aravinda de Silva went on to become one of the most exciting batsmen to wear a Sri Lanka cap. He was instrumental in his then minor league side’s famous ICC Cricket World Cup victory in 1996 – an unbeaten ton and three wickets in that memorable final against a stunned Australia won him the Player of the Match award.

But it was a successful season playing first-class county cricket for Kent in 1995 that marked a turning point in his career, being the third most prolific batsman in the county championship that year with 1,661 runs at an average of nearly 60 and six centuries including the highest score of the season (255).

Having debuted in Tests in 1984 at Lord’s against England, de Silva initially made his mark as an aggressive but somewhat inconsistent batsman. The mercurial ‘Mad Max’ (a moniker that’s part of the legend) was notorious for his penchant for getting out playing rash shots. The cavalier cricketer admitted this peccadillo by saying it was his natural game but remained unrepentant: “I don’t want to change because I feel confident playing that way. If someone is capable of dominating the bowling, they should do it…”

Say the critics what they may, it was his flamboyant batting on a good day that brought a lump to an onlooker’s throat (perhaps as much as his unnecessary dismissals brought tears to spectators’ eyes). Among his noteworthy feats with the willow was scoring a century in each innings of a Test match on two occasions.

One of these double-barrelled performances saw him score 138 and 105 (both unbeaten) against Pakistan at the SSC in April 1997. This made him the first and so far only player to score two unbeaten centuries in a Test match. Having scored 168 in the second innings of the previous Test, this meant he had posted three 100s in eight days! Aravinda saw that year off with panache and pizzazz: 1,220 runs at an average in excess of 76.

Aravinda de Silva was one of the five Wisden Cricketers of the Year in 1996. As for the icing on the cake, Wisden’s list of top 100 batting performances has six entries for him – that’s only one less than the West Indian legend Sir Viv Richards.

The highlight of Aravinda de Silva’s career was undoubtedly the 1996 World Cup. He was the tournament’s superhero, amassing 448 from six games at an average of 89.60 (with a strike rate of nearly 108) and taking four wickets at 21.75 apiece. In the final, Ara took 3 for 42, two catches and scored a masterly 107 not out to help Sri Lanka sail to a famous victory – a feat that will remain etched in the minds of cricket fans who watched the game.