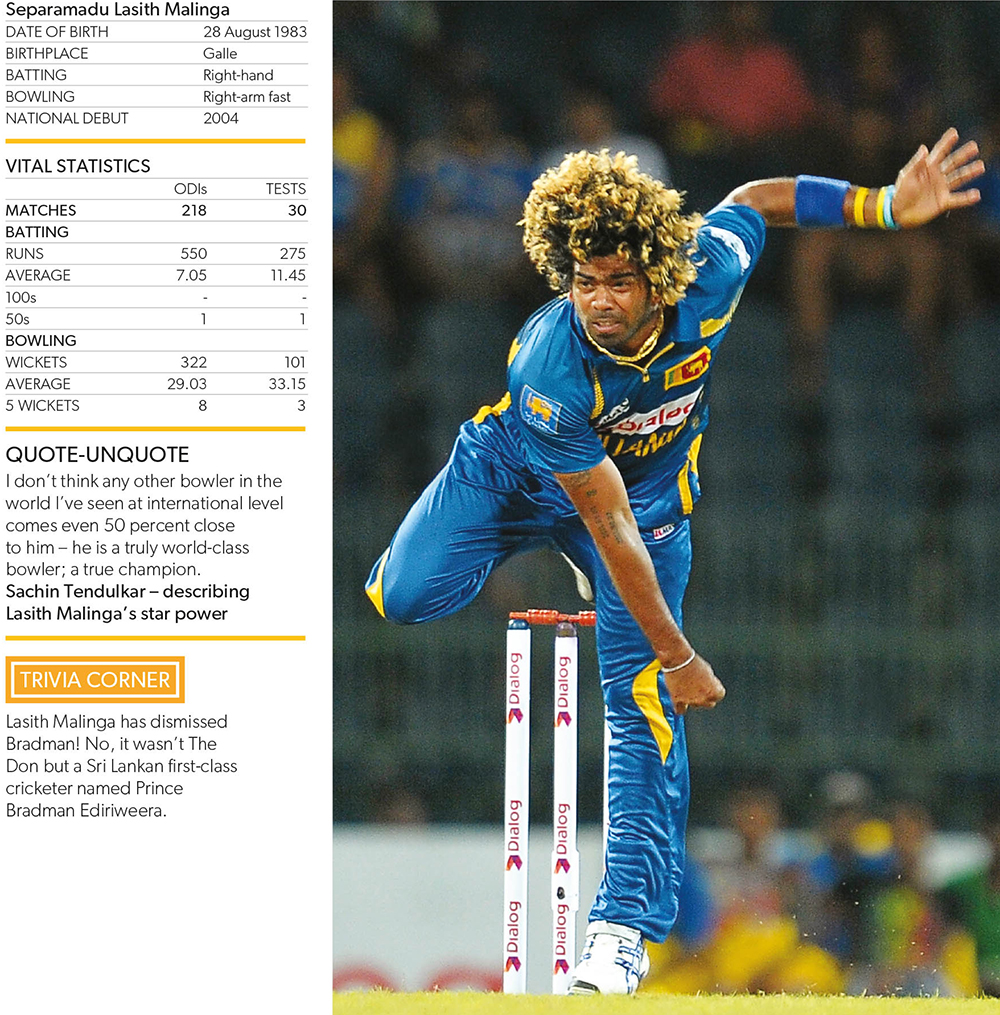 In Greek mythology, Medusa was a Gorgon – a dreaded creature with snakes serving her scalp as hair – who turned any man who beheld her into stone. In cricketing legend, it is a man with Medusa-like hair who performs the same deadly magic. A specialist death bowler, Lasith Malinga is his name.

One could easily add to his other monikers (‘Slinga Malinga,’ ‘Malinga the Slinga’ and so on) to concoct a vision of a mythical Gorgon-like creature – except that this gunslinger uses a cricket ball rather than serpentine coils to scalp his victims!

Gorgon apart, the ‘gunslinger’ tag arises from his distinctive round-arm bowling action, effectively mimicking the use of a sling in warfare. Malinga hurls right-arm catapults and the deadly impact of his aim has meant that he’s considered one of the greatest bowlers the ODI game has seen.

The weapons at his disposal in no mean arsenal of ordnance include the deceptive yorker, which is bowled at a deceptively slower pace – it dips before slipping under the bamboozled batsmen’s guard. This has only served to enhance his reputation as an unorthodox bowler who retains all his snake head-like charm for every scalp he takes. And he does take wickets. In fact, being best-known for his ability to take consecutive wickets with those in-swinging yorkers, Malinga is the only bowler to have two World Cup hat tricks to his name.

He is also the only thunderbolt thrower to have taken three hat tricks in ODIs and the only bowler to have captured four wickets in as many consecutive balls in any form of international cricket. No doubt, that he bowls at 140 kmph is only part of the deceptive deadliness for that isn’t necessarily super-fast. Yet, it is dead-on… when he gets it right.

Malinga has worked hard to gain traction as a pacey and consistency as a wicket taking speedster. In the case of the latter, he’s second in Twenty20 International cricket only to Pakistan’s Shahid Afridi. And he is the highest wicket taker for Sri Lanka in T20s.

Lasith Malinga has served his country as captain of the team that won the 2014 ICC World Twenty20. The Slinga was also part of the side that made the finals of the 2007 and 2011 Cricket World Cups, and the 2009 and 2012 ICC World Twenty20s. The long haired curly locked lad led Sri Lanka’s Twenty20 teams until early 2016 when he stepped down from the captaincy following a spate of injuries, which he couldn’t shake off as dynamically as he let those slings and arrows fly. More recently however, he assumed the T20 captaincy once again.

During the 2007 Cricket World Cup in the Caribbean, the lionhearted Malinga made his mark on the world stage as a cult figure. The now famous hairstyle had become his identity with the long curls streaked with colour. And Lasith Malinga’s unique bowling action turned him into a lethal spearhead bowler who is still feared by even world-class batsmen.

What’s more, he was named ‘the sexiest man in cricket’ by a Barbados based magazine – just one accolade among so many. And like the man himself, this was out of the box!

From his debut in Darwin in 2004 where he took six Aussie wickets and was presented with one of the match stumps by Adam Gilchrist, to taking more than 300 ODI wickets (including eight 5 wicket hauls), the highest wicket-taker for Sri Lanka in T20Is with 80 plus wickets has enhanced his motherland’s reputation for playing the game in cavalier fashion.

Discovered playing down south by former Sri Lankan fast bowler Champaka Ramanayake who was impressed by Lasith Malinga’s raw ability, the Slinga went on to resist attempts to straighten his bowling action – and his natural style eventually reaped rich dividends for this son of the soil who learned the game by playing ‘soft ball cricket’ on the streets of his hometown Rathgama. So Malinga came from outside the system and was propelled into the limelight for being one of a kind.