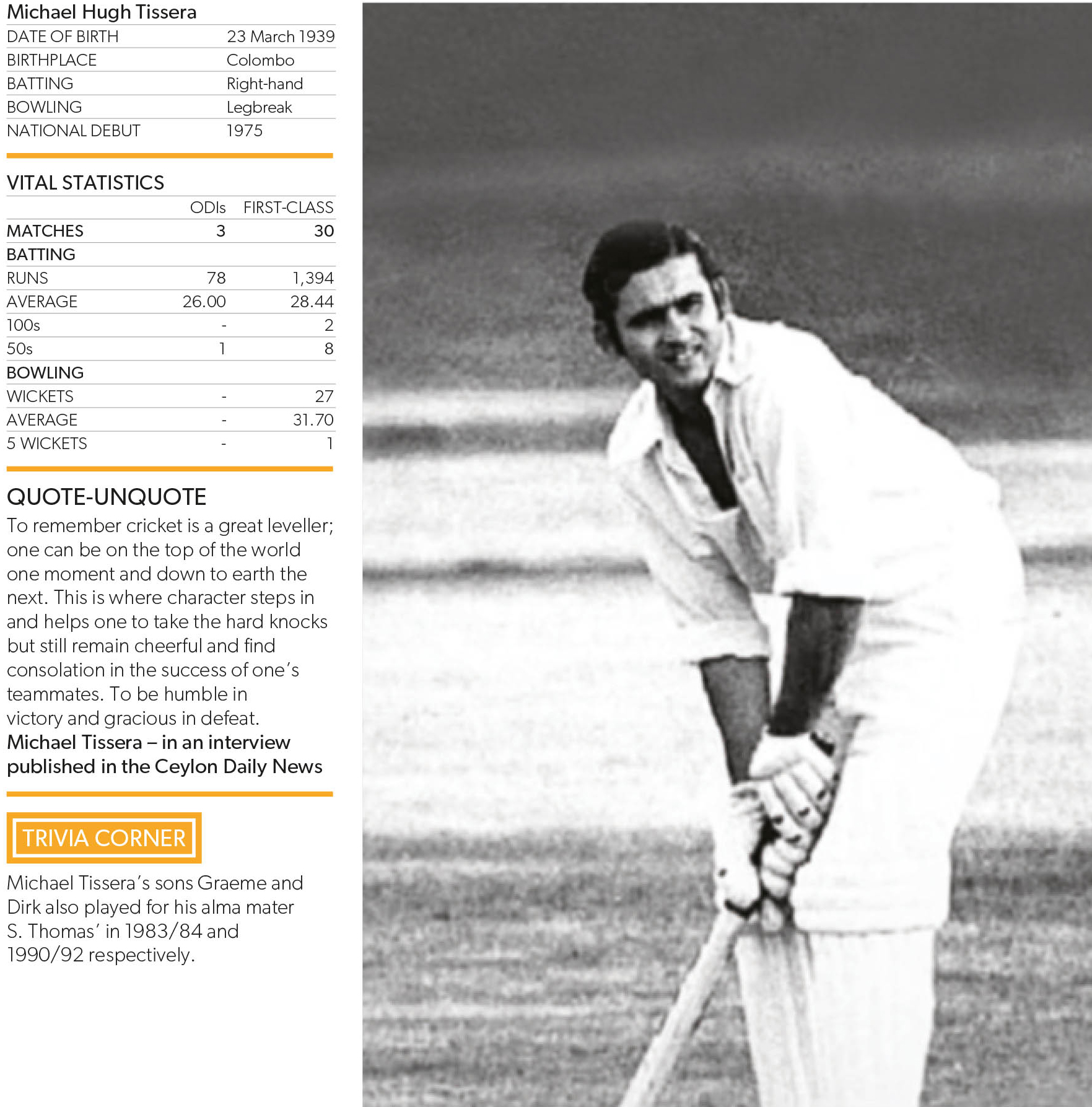 He was only 14 in his first appearance for alma mater S. Thomas’, which the young lad eventually captained in 1957 and 1958. Despite a glittering career in first-class cricket however, Michael Tissera hung up his boots prematurely, having first donned the national skipper’s hat at the tender age of 25 – the youngest Sri Lankan to have led the country.

Captaining ‘the school by the sea’ was a salutary experience for the stylish right-hand batsman who also bowled a decent legbreak when the need arose. Even captaining the then Ceylon to its first victory over a Test playing nation brought out a certain mettle (Thomian grit perhaps) by which fortune is vouchsafed the brave. His bold declaration in a low scoring game led to a four wicket victory over India.

Having made his first-class debut in 1959, Tissera was a treat to watch in the field – the young ’un set the bar for future generations to rise up to. And the youthful aspirant’s entry into the local cricket arena was destined to turn into a stellar international career – Tissera has been described as possessing a puritanical batting technique and being a risk taker who commanded loyalty when he captained a side.

Tissera’s two best innings were for his firm and club. In 1962, he scored 108 in a partnership of 112 runs for the 10th wicket for Brooke Bonds in Mercantile A Division cricket. There was also that remarkable innings for the last wicket for NCC against Saracens when Tissera scored all 58 runs (final score – 159 not out) in a one-sided partnership. The Trojan followed this blazing showpiece by taking 6 for 30.

A soft-spoken unassuming gentleman was transformed into a titan out there in the middle under a blazing tropical sun, which is where our island nation won its laurels in the days before ‘international cricket’ dominated. He was capable of debonair innings as much as dull affairs, which nonetheless underlined a true grit. On his debut in first-class club cricket, Tissera scored 103 for NCC in the P. Sara Trophy. In a much later game, the gallant plodder occupied the crease for an innings lasting a little under an hour and a half to score a meagre 18 against the touring MCC.

Hardly cavalier, you’d think? But many successes are built on the pillars of failure.

Who would have guessed that the stripling lad who was out for a duck on his debut in first-class cricket would go on to notch up a career best 122 not out? That was when he partnered Stanley Jayasinghe (135) in a valiant partnership of 224 runs for the 4th wicket against India.

This was not to be an isolated incident. He is the only player to lead three Ceylon teams to victory in a row: over Pakistan in 1964, as well as India and the MCC (both in 1969). Tissera captained Ceylon in 15 unofficial Tests, which is a record. In 1969, a still youthful cricketer again led Ceylon to its first win over the MCC in a 60-over match.

Pedestrian though it may sound, he played only three ODIs in the 1975 World Cup. A stalwart of Sri Lankan cricket, Michael Tissera also managed the national team between 2005 and 2007 – and going against the grain of future helmsmanship, steered the fortunes of the side with nary a blot on his escutcheon. We might never again see the likes of his style of leadership.

And in what is the ultimate accolade in world cricket, Sri Lanka-West Indies series are now played for the Sobers-Tissera Trophy. To share his name to a trophy with arguably the greatest all-rounder cricket has produced is surely the stuff of legend.

Going in after Duleep Mendis and Sunil Wettimuny had been laid low by Jeff Thomson in the 1975 World Cup game against Australia at The Oval in England, Michael Tissera batted gallantly to score an undefeated 52 in 69 minutes against the menacing duo Dennis Lillee and Thomson – indeed, the lion stood up to the kangaroos!