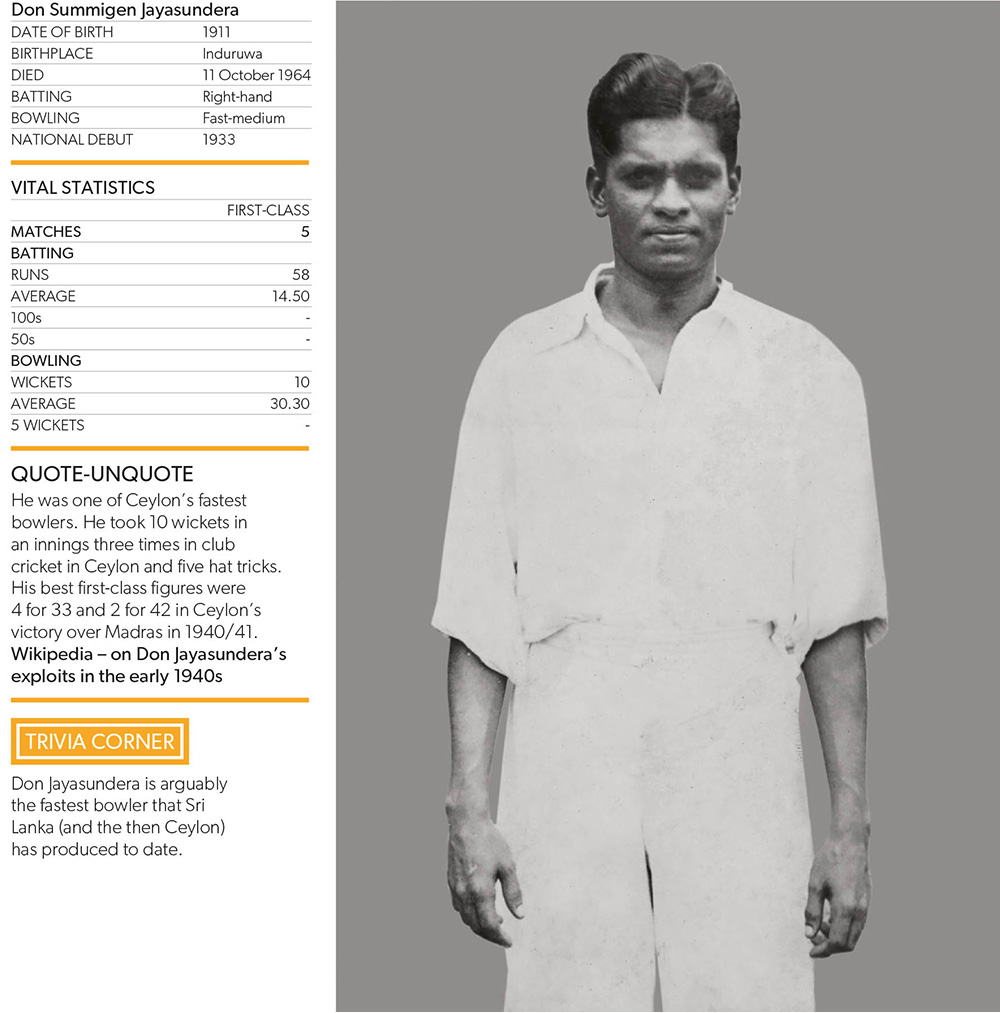 Some cricketers are remembered for their sporting temperament or larger-than-life personality. Others are destined to make it into the record books for their outstanding performances on the field. And then there are the exceptional cricketers who can’t put a foot wrong in any department of the game.

A smattering enjoy a vibrant afterlife as coaches, selectors or administrators of one kind or another. Don Jayasundera was none of them. He was good at one thing – and he did it exceedingly well. If he didn’t shine as bright as less talented stars in a bright firmament, it was probably because of a lack of opportunity rather than skill.

Ceylon – as it was then known – did not move with the distinguished galaxy of cricket playing nations at Test level. It achieved ICC status only in 1981… and before that, its cavalier race of islander cricketers had to be content with being a whistle stop for teams steaming between Old Blighty and down under. Or indeed, tour the subcontinent for a series of first-class fixtures.

With a middle name like Summigen, one could well have expected a more flamboyant career from Don Jayasundera. But for the longest time, there was nothing hugely distinguishing in this cricketer – still, he is remembered for being a ‘great’ among Ceylonese players of yore.

Born three years before the onset of World War I – in Induruwa, along the island’s southwestern littoral – Jayasundera played cricket in the major league in-between the World War II years (1939-1945). And he was particularly active for a period spanning 1933-1942.

Don Jayasundera was part of a Ceylon XI that toured neighbouring India in the 1940/41 season. The islanders’ side included its skipper Sargo Jayawickreme, Alexander Gooneratne, Gerry Gooneratne, Mervyn Gooneratne, Mervyn Kelaart, Louis Mendis, Ben Navaratne, Bill Porritt, John Pulle, Harry Roberts, Ranny Solomons and Abdul Wahid, a majority of who were tyros at touring the cricketing circuit of the subcontinental giant. And the captain of the team and Kelaart were the only members of the side that had been part of Ceylon’s previous tour in 1932/33.

On the tour of which Jayasundera was a part, the Ceylonese side was in India from December 1940 through to January 1941.

The island nation did not enjoy Test status at the time, which was to come four decades in the future. However, in the spirit of colonial neighbourliness, two three-day ‘unofficial Tests’ were played – and while Ceylon managed to hold India to a draw in the first game, the hosts struck back by winning the second – and thereby the series. This tour also included one other first-class match and two minor league matches. In one of the games, the tourists took a first innings lead of 121 and The (Ceylonese) Don completed the rout by taking 4 for 33 and 2 for 42 in his side’s victory over Madras.

While the Don of international cricket – Sir Donald Bradman – was reputed as a run making machine, Don Jayasundera (the local Don, shall we say) was hardly in the same league. Having played only five first-class matches and notching up a meagre 58 runs (at an average of 14.50), he was clearly a bowler.

However, that dynamic art was one in which this Don excelled. Without a doubt, he was one of Ceylon’s fastest bowlers – if not the fastest. Therefore, taking 10 wickets in an innings three times in club cricket came as naturally to him as tilting at windmills did to a more quixotic Don. He also took as many as five hat tricks – and that tells a story of a speed merchant like no other.

Don Jayasundera was called for ‘chucking’ in a school game in 1929 – the first time the word was heard in this country – although there was no recurrence of this thereafter. So instead of a career that could have been tarnished by this incident, the right arm speedster rose from his humble beginnings to emerge as arguably one of Ceylon’s fastest bowlers.