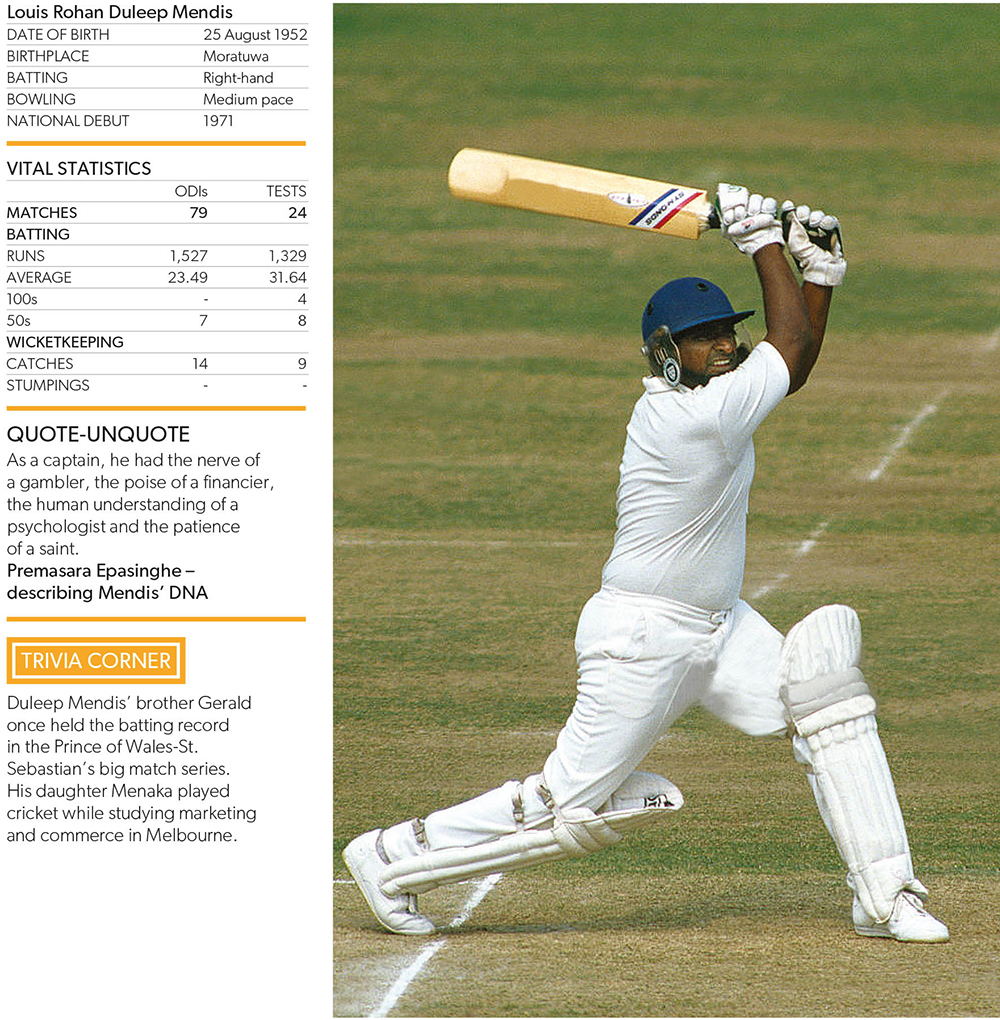 Some guys have all the luck… and a few forge ahead to fame and fortune through sheer bravery. For Duleep Mendis, it wasn’t fate or destiny that drove his ascendancy to the helm of Sri Lankan cricket; it was sheer pluck. And according to Wisden, “the strong, burly, wristy batsman was capable of destroying attacks at any level when the mood took him.” But the stocky “bull of a fellow” (Cricinfo’s words) was more than a bulwark against deadly pace attacks. He was a leader in the sense of ‘being there.’

Duleep Mendis was once carried off the field unconscious after being felled by a demonic Jeff Thomson delivery at The Oval in the 1975 Cricket World Cup. In hospital, the fallen hero was asked by a policeman – who had heard that the Sri Lankan had been ‘assaulted’ by an Australian – whether he wanted to press charges. The answer was reportedly a ‘Mendis Special’ that can’t be published!

Despite showing untold promise as a schoolboy cricketer, Duleep made heavy weather of it as the nation’s second Test playing captain.

In fact, his personal fortunes were often diametrically opposed to those of the team he led. In the 1983 Cricket World Cup for instance, Sri Lanka lost games in which Mendis made reasonable scores while the skipper scored but a duck in his side’s solitary win.

The early promise that the stocky cricketer showed was at the ‘school by the sea.’ Having skippered St. Sebastian’s previously (where he amassed over 1,000 runs in the 1968 season), Mendis went on to captain S. Thomas’ for which he played three years. In the Royal-Thomian of 1971, Duleep scored an unbeaten 103; and the next year, he hammered a herculean 184 to become the highest scorer in the series at the time. In his debut for Sri Lanka in 1972 against Tamil Nadu, Mendis top scored with 52 in the first innings but only made 34 in the second – and his side lost by an innings. And in his first ODI (in 1975 against the Windies), he couldn’t get to double figures. In fact, in Duleep Mendis’ first eight Test innings, the portly batsman racked up only one half century.

Although his assimilation into the annals of international cricket was slow, Duleep Mendis was slowly but surely being ensconced as a plucky heavyweight who would ‘be there’ for his team.

In 1982, the pocket Hercules showed his true colours: a 153 run partnership in tandem with Roy Dias saw Sri Lanka bat out the first day after an early stumble (11 for 2). Replying to India’s 566 for 6, the Sri Lankan openers were back in the pavilion early once again but Mendis’ 105 saw his side through to tea on the fifth day – and Sri Lanka eked out its first draw in Tests.

The deluge from Mendis came on the Indian tour of 1985. The hard hitter led from the front with three 50s and a series saving century in the third Test to beat India 1-0 in a three Test series. Thereafter however, his runs slowed down to a drizzle: two half centuries in his last 10 Tests and two 50s in his last 32 ODIs. In his last game, his swan song 56 couldn’t save the day.

Having hung up his boots, he remained in the local cricketing orbit as manager of Sri Lanka’s World Cup winning side of 1996.

He may have been short on luck at times but the little lion had plenty of pluck. Duleep Mendis was fearless in the face of the most daunting pace attacks at the time and pulverised many a stupefied pacey with his uncanny shot selection. Those who watched ‘Dulla’ become the first Sri Lankan to score twin centuries in India (105 and 105) or his heroics at Lord’s (111 and 94) would never doubt that their heavyweight was an inspiring champion.