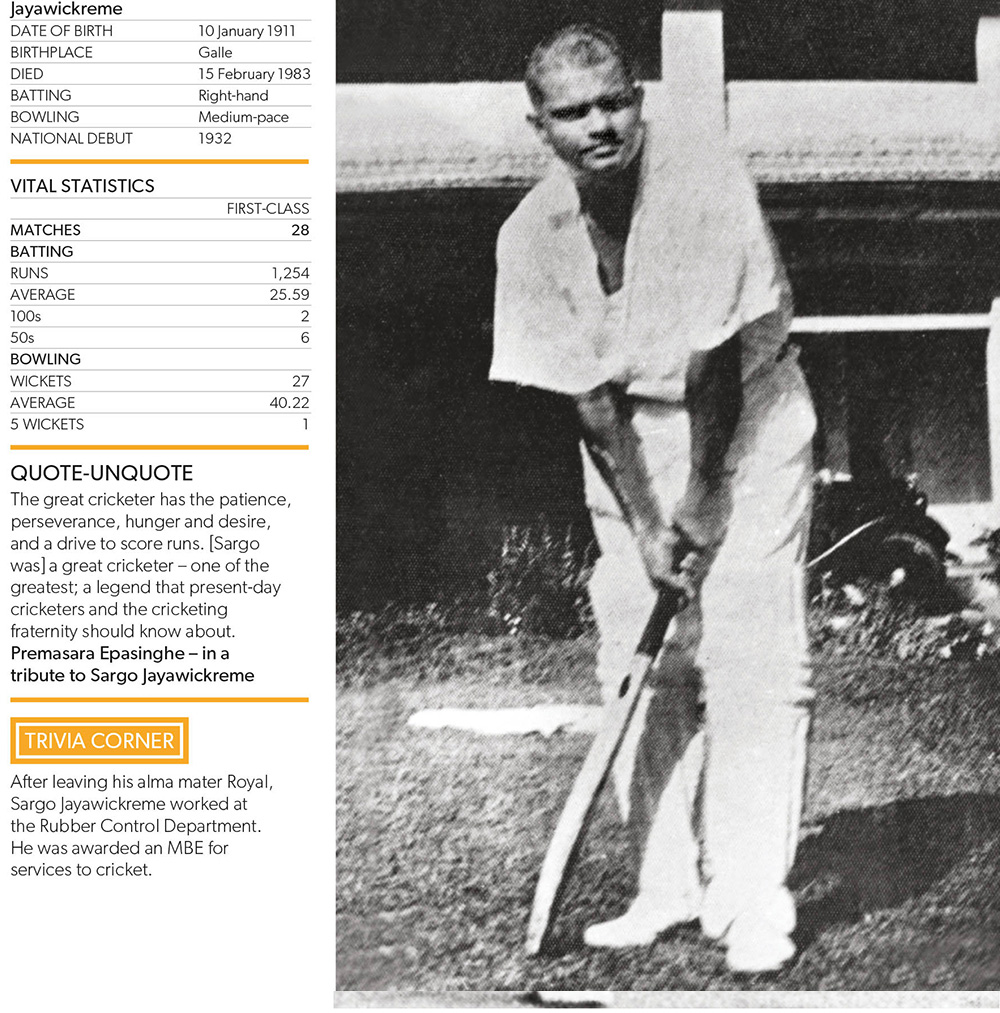 His name – Sagaradaththa Sudirikku Jayawickreme – is a mouthful; but to those who knew him by more than name, ‘Sargo’ was the quintessence of simplicity and he was widely regarded as a gentleman who played the gentlemen’s game. Unassuming, soft-spoken and kind-hearted, he played with Ceylon cricket’s crème de la crème in the 1940s.

The redoubtable F. C. (‘Papa’) de Saram, his close friend and associate, considered Sargo a role model for all cricketers. And ‘Papa’ was far from miserly with his praise.

“In Ceylon … there is a right-hand batsman, a complete cricketer, by the name of Sargo Jayawickreme. If he played against this Australian side, they would have learned some finer points in the art of batting. I am just an ordinary batsman compared to my club mate,” he once said during an interview.

A middle-order batsman and medium-pace bowler, Jayawickreme was a product of Royal. He featured in the ‘Big Match’ against arch rivals S. Thomas’ as many as four times and the cherry on the top was leading Royal to victory in his final year as skipper in 1930.

Sargo Jayawickreme’s schoolboy triumphs included the dismissal of a future Prime Minister of Ceylon – Thomian cricketer Dudley Senanayake who went on to captain his school – whom the young Royalist bowled out for a paltry six runs.

Upon leaving Royal, Sargo signed up for SSC and in 1932, he represented Ceylon against India, scoring a brilliant 130. And against a Bengal Cricket Association XI, the big hitter notched up 132. In the local club circuit, his highest score was a scintillating 238 against Bloomfield.

Jayawickreme was one of the youngest Ceylonese to tour India in 1932/33. The leading batsman on the tour – amassing 421 runs at a sterling average of nearly 47 – he was no slouch in the bowling department either, taking 15 wickets at an average of less than 26.

A flashback to his Indian outing captures some of Sargo’s métier. He began the tour by taking 5 for 58 and 2 for 30 on his first-class debut in the opening match against Sind. The record books reveal that Jayawickreme scored 130 in the second of two matches against India when he rescued an innings that was seemingly in tatters at 86 for 5 to reach a respectable 305.

Little wonder that reporting on the Ceylon tour, Indian journalist I. M. Mansukhani described Jayawickreme as being “the most impressive of the Ceylonese batsmen with a wide and delightful range of strokes.”

This dashing cricketer led Ceylon on two tours: the first to India in 1940/41 and then Pakistan in 1949/50. On the latter tour, he scored 138 in a little over three hours to rescue his side from dire straits when they were struggling at 24 for 3. Sargo’s masterly batting was on show in several first-class matches on the subcontinent too, which included playing for ‘The Rest’ in the Bombay Pentangular (1937/38 and 1944/45).

Distilling a measure of Jayawickreme’s brilliance, cricket commentator Premasara Epasinghe wrote: “In cricket, there is a difference between a good player and a great player. The great players concentrate and improvise their shot selection. The good players rely on bad balls. The difference is that a great player takes good balls and turns them into bad balls…”

In what was a stellar career, Jayawickreme scored 56 centuries in first-class cricket. He has been described as one of the finest, most fearless and brilliant batsmen that the then Ceylon produced. It comes as no surprise therefore, that Sargo Jayawickreme was awarded an MBE for services to the game.

In one match, Sargo was hit by Indian fast bowler Mohammad Nizar in the first ball he faced. He fell to the ground but rose to take guard once again. Jayawickreme then hammered Nizar for a towering six and four hits to the ropes in the same over! He was indeed a true lion!