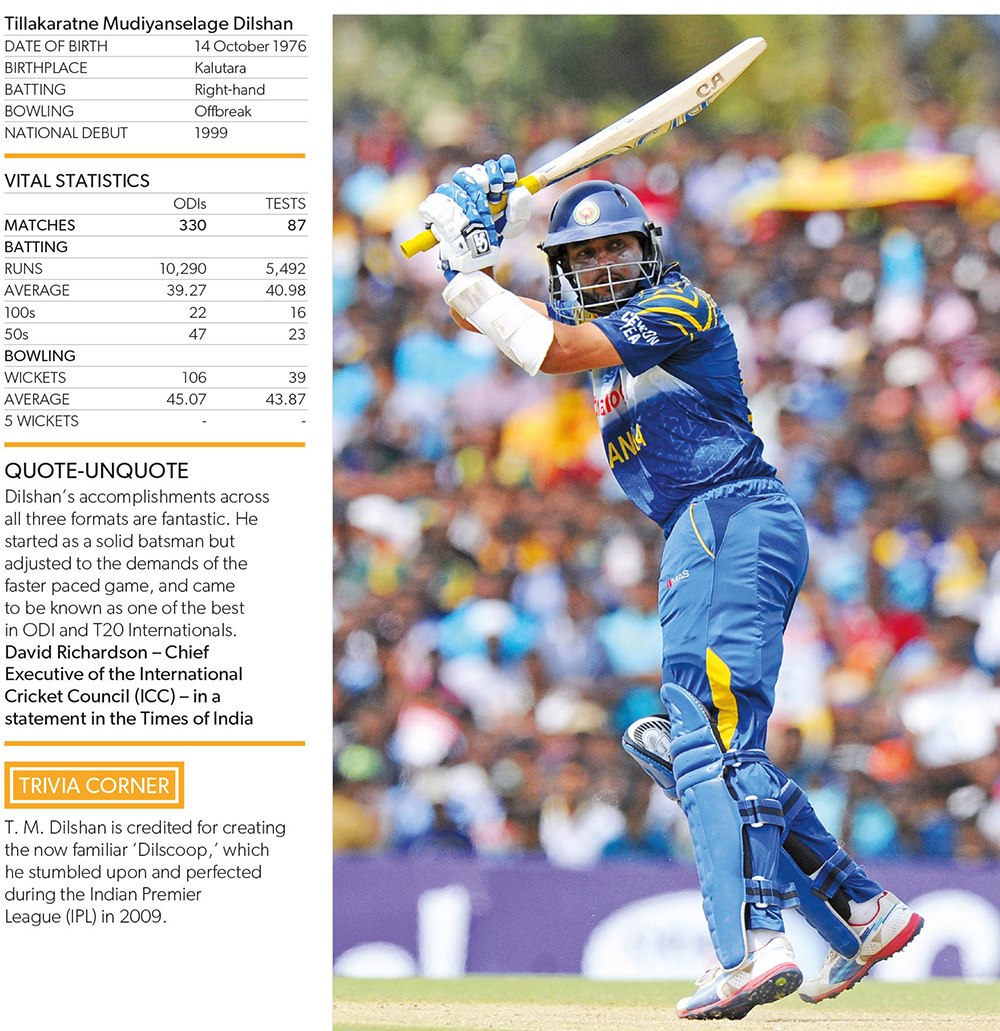 Sometimes, success and its sister fame come from being in the right place at the right time. As long as he batted at No. 6 or 7, Tillakaratne Dilshan remained in the middle or lower order in more ways than one. But no sooner was he promoted to bat up the order, his maverick genius for making runs at a rate of knots shone through.

Once he was given the opportunity to open the batting for Sri Lanka, Dilshan made 22 ODI centuries. In fact, all his Test and T20 tons were made opening the innings.

Then again, being a maverick genius means stumbling upon the source of your success and attendant reputation quite by chance. Dilshan made a serendipitous discovery – namely, that a ball can be scooped up by a bat held at an unorthodox angle and catapulted over the wicketkeeper’s head… to the boundary. In fact, his unorthodox approach to batting led to opposing captains setting equally unorthodox fields!

Being innovative comes effortlessly to Dilshan. As a right-hand bat, he was often dangerously aggressive. But when he got it right, the swashbuckler was dazzling to watch. He once hit six consecutive fours in a single over.

Despite making his mark as an opening batsman however, Dilshan bowled the occasional offbreak and had a knack of making vital breakthroughs. A veritable livewire in the field, he’s reputed for keeping batsmen and wicketkeepers (as well as umpires!) on their toes with his athleticism at point.

Highly rated for a single-minded ability to chase runs, Dilshan was Sri Lanka’s cavalry – riding to the rescue of his marooned garrison on many an occasion. A case in point was his assault following India’s 414 at Rajkot in 2009. Opening the batting with Upul Tharanga, he partnered in a blistering 50 off 38 balls to help his side reach 100 in 73 balls. His dashing 150 needed only 115 deliveries.

A near century he made – 96 off 57 balls against the West Indies in an ICC World T20 semi-final – epitomises Dilshan’s aggressive approach to batting. But a string of tons also highlights his determination to get the job done with panache as much as practical results.

An unbeaten 163 against Zimbabwe secured his maiden Test century and the Player of the Match award, and sealed Sri Lanka’s victory. His highest Test score of 193 was at Lord’s against England. And he was the first cricketer to score hundreds in all forms of the game as captain. T. M. Dilshan was unstoppable.

Stats can be stolid stuff but often, it’s the stand out performances that linger in urban legend. There was that maiden ODI century against the Netherlands in 2006 for instance, when Dilshan pulverised the Hollanders in partnership with Sanath Jayasuriya and helped Sri Lanka post its then highest ODI score of 443 runs – a record that stood for 10 years until England scored 444.

Yes, even legendary records tumble. But the memory of the game’s mavericks remains indelible.

A match winner and game changer who took a wicket off his last delivery in inter­national cricket, Tillakaratne Dilshan is no stranger to aggressive essays of the ball – six consecutive fours; anyone remember that? That he perfected the eponymous ‘Dilscoop’ is entirely to his credit. And when it came to all-round brilliance, T. M. Dilshan was all intentionality – he could bat, bowl, field and keep wickets; the epitome of a nonchalant skill set.