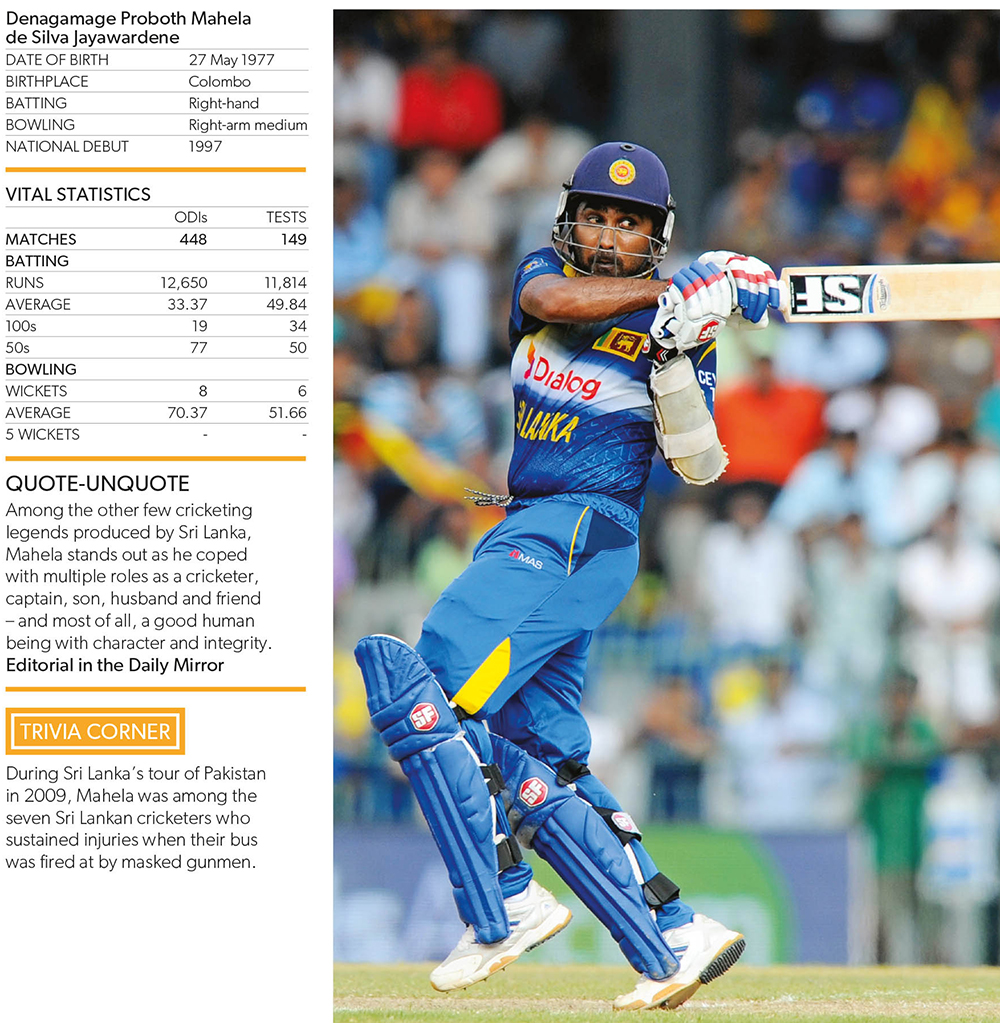 Few batsmen can read a spinner’s craft well; and to play spin superlatively speaks volumes for one’s mastery with the willow. Mahela Jayawardene was both cool and classy at the crease – and he made batting look easy.

High-water marks appear against his name almost everywhere. His masterful 374 against South Africa in 2006 is the highest Test score by a right-handed bat. He also totted up well over 10,000 runs in ODIs to become the first islander to do so. Being also the first Sri Lankan batsman to tuck away an almost equal number of Test runs surely demonstrates his virtuosity.

Mahela holds the record for being the first Sri Lankan captain to score a Test triple century (that 374 off 572 deliveries with 43 fours and 1 six, which is the fourth highest individual score in Test cricket).

Anyone who has watched him play elegant strokes with quiet determination while the storm often raged around him would know that his Test average of nearly 50 is worth its weight in gold – his stays at the crease saw power packed tons and double centuries. Early in his career, Jayawardene scored 167 against New Zealand and 242 versus India. What’s more, he scored centuries against all Test playing nations during his time.

Another hallmark of the master strategist was his leadership skills – he has been hailed in cricketing circles as a superlative skipper. Captain of the national squad on an England tour in 2006, he led his team to a 1-1 draw in the Test series and a 5-0 whitewash in the ODIs.

If captaining was his forte, fielding was the cherry on the cake of Mahela’s versatility. He holds the record for most number of catches in ODIs, grabbing 218 in 448 matches. His talent in the inner ring came to the fore when Cricinfo noted in late 2005 that since the 1999 World Cup, the highly regarded in-fielder had notched up the highest number of run-outs in One-Day cricket.

And he’s a realist too as this quote typifies: “There is so much uncertainty in cricket. One day you can get a hundred, the next day you can be dismissed for a duck. It makes you become practical about things; teaches you to accept both success and failure…”

Mahela learned his cricketing skills at Nalanda, which he captained in 1994. And he went on to develop his talents at the NCC’s bowling clinic though he played for SSC from 1995.

Jayawardene’s awards are legion. He made his Test debut in 1997 and ODIs the very next season. Less than a decade later, he was named the ICC’s Best International Captain of the Year (2006) and nominated the following year as the Best Test Cricketer of the Year.

Following his retirement, Jayawardene has made his mark as a go-to coach. In August 2015, the England Cricket Board (ECB) signed Jayawardene as batting consultant for the England team. He also coached the Mumbai Indians to clinch the Indian Premier League (IPL) in 2017.

Jayawardene was picked as captain of the World One-Day International Team of the Year in 2006 and adjudged Wisden Cricketer of the Year a year later. He also captained Sri Lanka when it won the Spirit of Cricket Award in 2007 and 2008. That he won the ICC Spirit of Cricket Award in 2013 bears testimony to the mettle of Sri Lanka’s quintessential cricketer.

Off the cricketing field, Mahela Jayawardene has won praise for his contribution to the HOPE cancer project. In memory of his deceased brother Dhishal, he became the project’s chief campaigner and has walked 670 kilometres from the very south to the northern tip of the island to raise funds – he is therefore, a man with a mission.