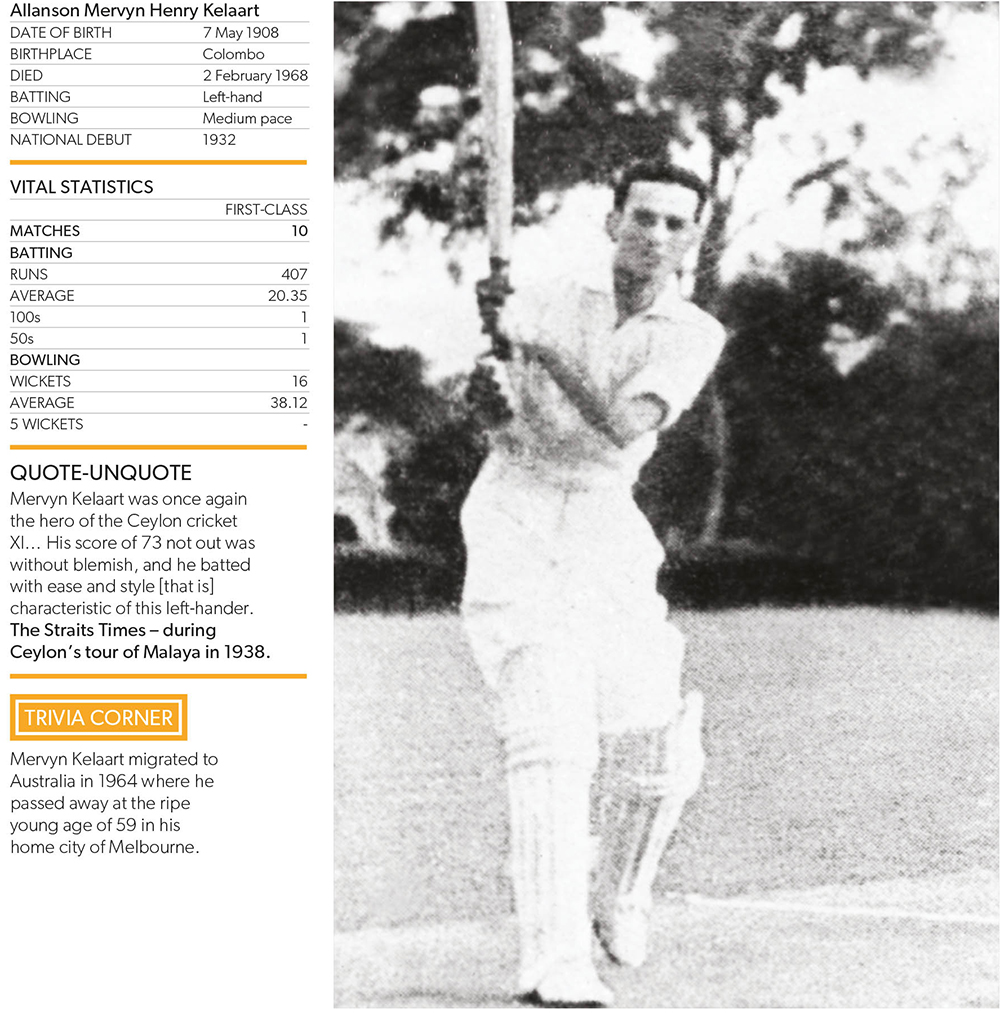 There are certain firsts one never forgets. First love, first friend at school, first bike or car, first job or boss and colleagues, first whatever else one feels sentimental and nostalgic about. And like many if not most Sri Lankans who are unrepentantly passionate about the game of cricket, the then Ceylon’s first century in an international game was memorable.

That singular honour goes to Mervyn Kelaart, a Ceylonese cricketer who lived and breathed in the blessed isle and beyond for some 60 summers. He played first-class cricket for eight years between 1932 and 1940 before World War II interrupted the perennial summer game for a relatively short period.

But even the brutality of a world at conflict with itself could cast only a temporary shadow over the halcyon days when cricket continued to be played after the battlefields had been cleared.

Mervyn was a left-handed batsman of distinction. He had a reputation for being an exponent of two particular strokes – the cut and leg glance. On the inaugural tour of colonial Ceylon to neighbouring India in the 1932/33 season, Kelaart was in many ways a star in the island’s sky.

Where the visitors to the subcontinent posted a total of 287 in the first of two matches against their hosts, the leftie notched up a dashing century. He came in at No. 3 in his side’s batting lineup.

Interestingly, his brother Ed Kelaart was Ceylon’s captain at the time – as a stand-in skipper because the regular captain C. H. Gunasekera (Snr.) had been recalled to Colombo in his capacity as Medical Officer of Health to combat a malaria epidemic that had broken out – an untimely outbreak for the touring Ceylonese side.

After the hiatus brought on by a war that cast a shadow over world cricket as much as any other human endeavour, Mervyn never played for his island side again. But he was a part of the Ceylonese team that toured India in 1940/41 as well.

Before he brought glory to Ceylon by batting against ‘big brother’ India, Kelaart showed early signs of promise as an all-rounder. Schooling at St. Joseph’s, he was doubly noted in the honours roll by dint of being at the top of both batting and bowling averages in one year.

In addition to his prowess with the willow, the lad also made his mark as a right arm medium pace bowler. He also featured in a Ceylonese side under C. H. Gunasekera (Snr.) that was noted for its superlative running between wickets.

But it was as a batsman that Mervyn Kelaart made his mark. In a match between a Ceylon XI led by C. H. Gunasekera (Snr.) against a Combined States side in Seremban (Malaya), Mervyn Kelaart head­lined the islanders’ batting performance. The record states that the Ceylonese batsmen soon became accustomed to the bowling and started scoring freely. And the international media captured his elan with these words, as reported in the then Malaya’s Straits Times of 17 April 1938: “Mervyn Kelaart was the hero of [the] match. His 73 not out was faultless. … He batted with ease and a style characteristic of the left-hander.”

“Mervyn Kelaart once again showed that he is a batsman of class. His 73 not out was a fine bit of batting,” the Straits Times added.

High praise, perhaps momentarily savoured and then relegated to the record books. That said, there’s the all-important matter of that premier international century that has made a permanent impression in the minds of cricket aficionados in this country.

In a game against a visiting MCC team in 1935, the selectors picked five opening batsmen to play for All-Ceylon and left out two of the fastest bowlers (D. S. Jayasundera and Hilton Poulier) who were in the squad from the playing XI. So Mervyn Kelaart – principally a batsman – took on the task of opening the bowling and displayed his passion for the game.