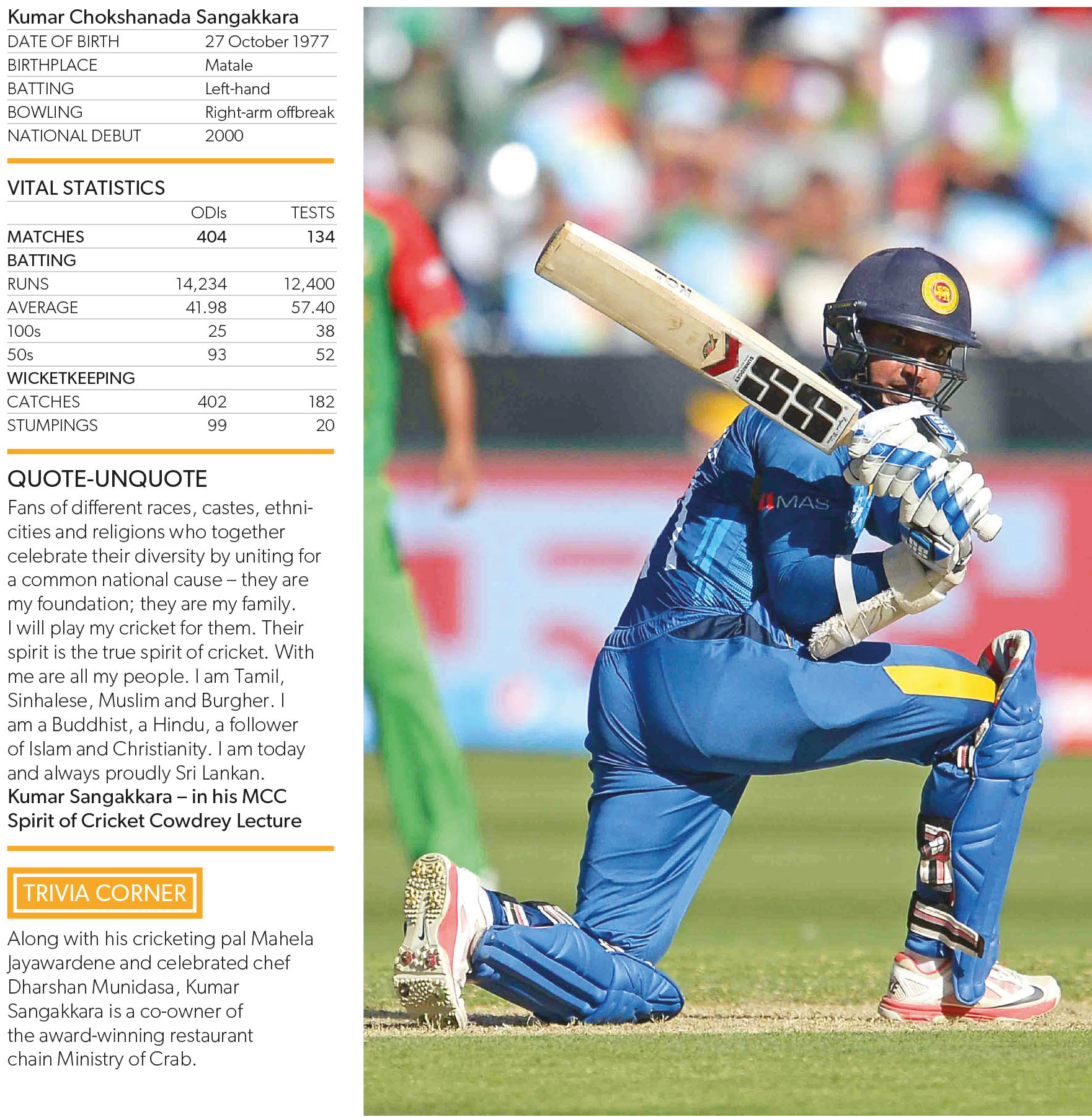 If you’ve seen his cover drive, you’ve lived. But a panoply of other strokes would serve equally well to transport you to a cricketer’s paradise – for Kumar Sangakkara was the classic stylist who put a dash of elan into virtually every stroke he played.

From being described as one of the most polished and prudent batsmen to demigod status as not only one of the world’s most influential cricketers but also ‘one of the greatest batsmen of all time’ is not a hard slog to an all-rounder of Sanga’s calibre.

A left-handed top order batsman, he’s also a record-breaking wicketkeeper. Sangakkara retired from the game as the second highest run scorer in ODIs and sixth highest in Test cricket.

In a spectacular 15 year career, the prolific batsman amassed 28,016 runs in international cricket to his credit and dominated the top slot in the ICC’s Test batting rankings for almost a decade.

Far from being a cavalier soloist, Sangakkara is a considerate partner. He co-starred in many formidable partnerships with longtime teammate and close friend Mahela Jayawardene. The duo holds numerous batting records in all formats of the game.

Kumar, Sangakkara made an impact from his early days, having featured in his alma mater Trinity’s under 13, 15, 17, 19 and first XI squads. And he was awarded the Trinity ‘Lion’ – the Kandy school’s most prestigious prize awarded to a sportsman – for his exceptional batting and wicketkeeping in 1996.

Sangakkara was selected for the Sri Lanka A team’s tour to South Africa in 1998/99 where his unbeaten 156 against Zimbabwe A in a One-Day match won him a place in the national side a year later.

He has also won the LG People’s Choice Award twice (2011 and 2012) and LMD’s Sri Lankan Of The Year award in 2011, and was Wisden’s Leading Cricketer in the World in its 2015 edition. And to cap it all, Sangakkara was voted the Greatest ODI Player of all time in a public poll conducted by Cricket Australia in 2016.

The plethora of awards reflects the suave gentleman’s many achievements. Since space constrains their mention in full, suffice it to select the following as being representative: a record-breaking 624 run partnership with Jayawardene in Test cricket; Sri Lanka’s highest ODI run scorer, the record for ODI wicketkeeping dismissals; and the first batsman to score more than 150 in four consecutive Tests – and there are a legion more…

And to cap it all, his count of double centuries in Test cricket (11) is second only to the legendary Don Brandman (12).

Upon his retirement, Sri Lanka Rupavahini Corporation recognised Kumar Sangakkara as the Player of the Century, citing many of his past achievements. Despite state TV’s usual hyperbole, Sangakkara – who has steadfastly refused his public’s entreaties to essay an innings in politics – may have felt it wasn’t unwarranted.

Full of esprit de corps on the field, the dashing batsman and former Sri Lankan skipper was the youngest person – and first active international cricketer – to deliver the MCC Spirit of Cricket Cowdrey Lecture. Perhaps more than any derring-do, his speech was widely praised by the cricketing community for its gutsy outspokenness. It placed Sangakkara in a pantheon of immortals who have played the gentlemen’s game.