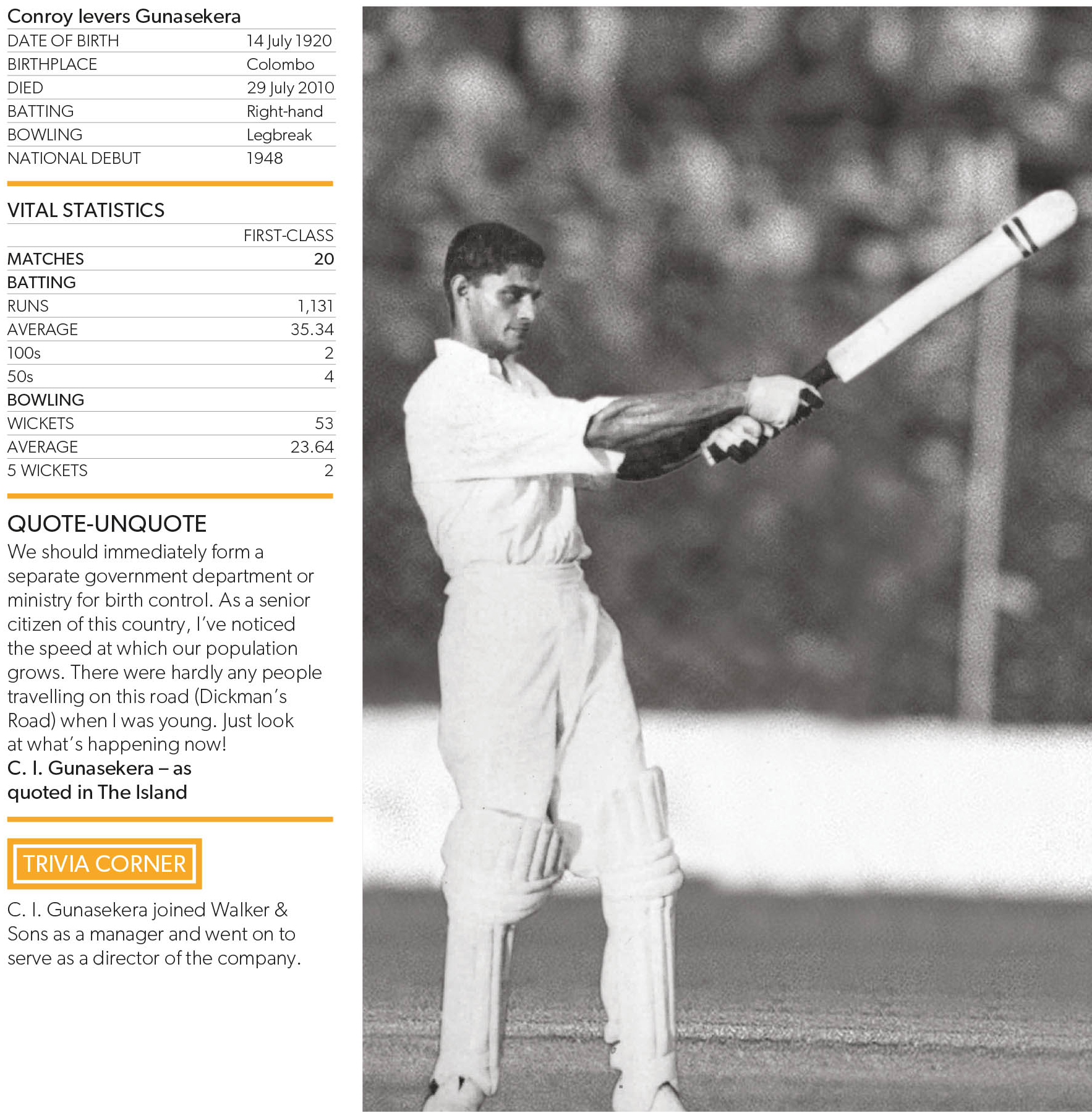 Some gentlemen cricketers are remembered for their gentlemanliness as much as their cricketing prowess. C. I. Gunasekera was such a colossus; he straddled the worlds of gentility and achievement in the gentlemen’s game. To underline his character, let two eulogies serve.

On the one hand, English cricketer David Sheppard once described him as “a great cricketer who would surely have played Test cricket if he had qualified for another country.” The high profile Anglican Bishop of Liverpool who once represented Sussex and England added that ‘CI’ (as he was known) was a “fine, forcing batsman driving with great power…” That’s the acumen angle of it.

On the other hand, take what Sri Lankan cricketer and commentator Premasara Epasinghe had to say about him: “He was a man of many parts… a fine conversationalist… a lover of vintage cars. He captained Ceylon and was a gentleman par excellence…”

Glowing in his praise, Epasinghe added: “C. I. Gunasekera was a colossus; he was the most attractive, charming, hard-hitting batsman I have seen.” And he was effusive in his personal epitaph for a man whom he considered a true great: “Someday or other, Conroy Ievers Gunasekera’s name will be written in gold in cricket’s Mahavamsa.”

CI did much in his career to earn both adulation and affirmation. Educated at Royal, he captained his school against traditional rivals S. Thomas’.

In his college years, this Gunasekera demonstrated the sporting gene that runs in the family. He was a born athlete and versatile sportsman, excelling in rugby, athletics and tennis; and later in life, it was golf. In 1940, he enrolled at Law College where (despite his legal duties) his first love remained cricket, to which he gave priority.

For the next two decades, he blossomed as an outstanding all-rounder, a dashing right-hand bat and a fine legspinner. By all accounts, he started to strike out hard in earnest in the 1947-49 period with three remarkable centuries – 104 against B. R. Heyn’s XI, playing for F. C. de Saram’s SSC side; 125 (retired) against Saracens; and a fiery 120 in the face of a Pakistan attack.

While representing Ceylon, CI once pummelled the Pakistanis all over the ground to score a majestic 125. Later, in trials to select the islander side against the mighty Don Bradman’s Australian XI, CI and Sargo Jayawickreme shared a spectacular partnership of 166 to which the former contributed 84. Gunasekera is credited with many memorable knocks including a double ton against Pakistan. He also represented the Commonwealth, scoring a century in their game against England, batting alongside the swashbuckling Aussie Keith Miller.

Cricket was no doubt his forte – and his mantra that ‘attack is the best form of defence,’ complemented by a good eye and nimble footwork, made CI the ‘master blaster’ of cricket in his time. Witness a mercantile encounter where he made a power packed 78, leaving fielders who tried to stop his powerful square cuts blue in the palms. CI batted with panache because his defence was sound and he dictated terms to the bowlers. On top of this, the Trojan was a burly legspinner who was hard to play because he would mix up his googlies.

His peers in the mercantile sector have said that CI served with distinction. Being a gentleman of the highest order and unassuming to boot, he stood for justice and fair play.

Wherever this flannelled worthy turned out to represent his country or club (SSC), legions of fans, admirers and cricketing aficionados also went. He soon became the darling of Ceylonese crowds with spectators in their thousands flocking to see their charismatic hero in action. And despite or because of his charm and grace, C. I. Gunasekera was a disciplinarian – a gentleman with a golden heart; and above all, a great man for ebullient honesty and integrity.

Against an England team captained by Ted Dexter – on a whistlestop tour of the island in 1962 – C. I. Gunasekera thrashed the likes of Ray Illingworth and Fred Titmus. He hit five sixers over the sightscreen to score 28 in two overs. Dexter invited the tall lithe Ceylonese to join his team and play in England!