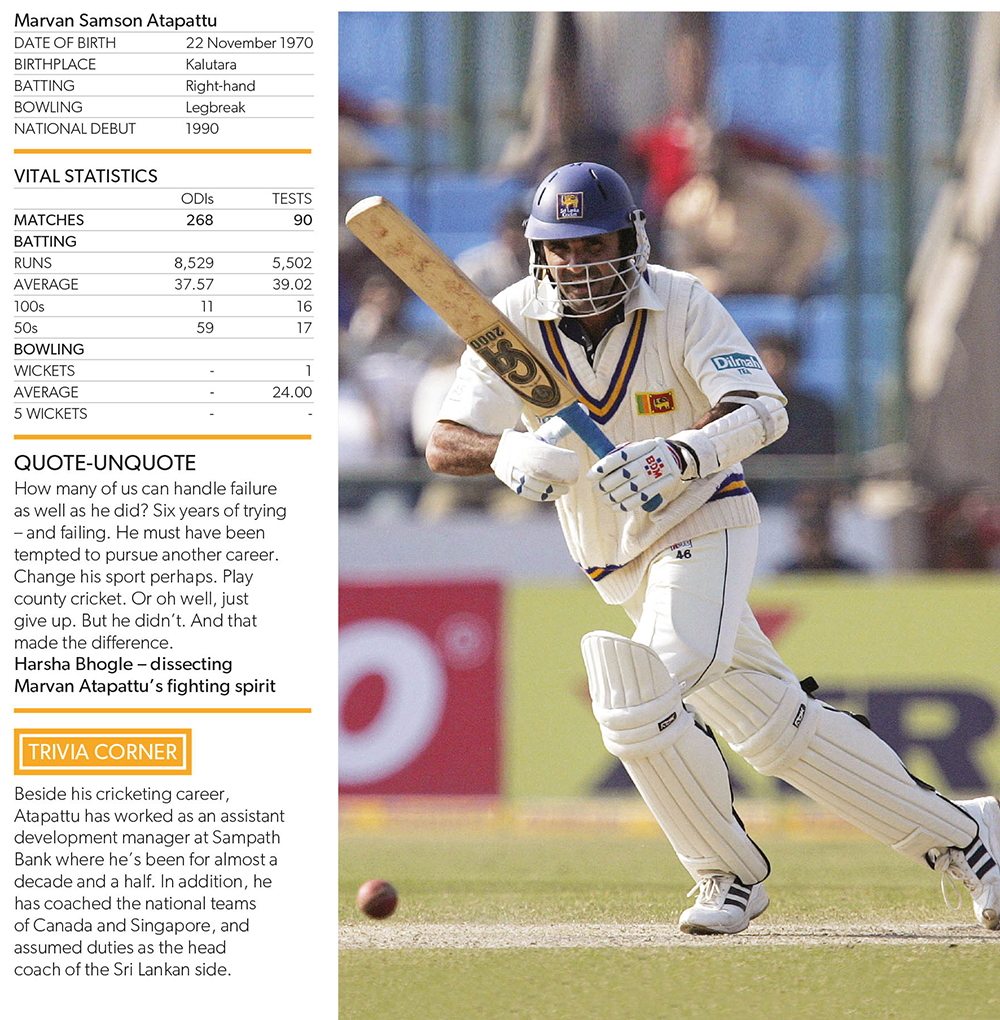 If there’s one thing that daunts even the doughtiest batsman, it’s getting a start. An abysmal beginning and continuing in the same vein as if one was stuck in a rut is a cricketer’s nightmare. This in fact, is how Marvan Atapattu kicked off his illustrious career! It was a debut that won’t fade from his memory all too easily.

Atapattu strode out to the crease on his Test debut only to return with a duck to his name. And in the second innings, he did the same to end his first game with a golden duck – the first Sri Lankan batsman to be dismissed for a pair on debut.

There seemed to be little choice but drop the stylish batsman who had shown so much promise in the nets. However discouraged he may have been, Marvan manfully put in extra hours of practice and continued to score runs in first-class cricket. Eventually, his patience as well as a penchant for making the grade paid off, and he was recalled to the national side following a 21 month hiatus.

In the context of runs, his second shot at guts and glory wasn’t exactly an embarrassment of riches. He fell at the first hurdle, making his third duck in a row in the first innings of his comeback game and barely managed a single in the second, which may well have been a leg-bye!

So dropping him again was a no-brainer to even his ardent supporters on the selection panel. Back to the grind, the intrepid Atapattu cut and drove in classic style to pile on the classiest runs first-class cricket had seen in a while. It soon appeared that the selectors had little choice but to yield to his calling yet again.

But when the recall came a little over a year and a half later, all Marvan Atapattu seemed capable of producing were two more ducks – so he had scored a grand total of one run in six Test innings!

Many observers shook their heads in dismay and disbelief, and murmured platitudes about Marvan lacking the temperament to play in the big league. Not to be outdone, the stricken batsman put his head down once again and applied himself with diligence; and it was a calculated investment that yielded rich dividends both for the national side as well as himself. A harvest of runs followed.

In what was a scintillating career eventually, his flashing blade cut down over 5,000 runs including 16 tons and six double centuries – a feat that only Don Bradman (who had 12 to his name), and Wally Hammond and Brian Lara (with seven apiece), achieved.

His critics were silenced while the aficionados of optimism who had believed in their boy all along justifiably crowed about the calibre of a cricketer who wouldn’t give in to failure.

The captaincy of the ODI team came in 2003 in recognition of his form and cricketing prowess. And Atapattu rewarded the affirming selectors as well as awed spectators with his highest Test score of 249 against Zimbabwe in 2004, starring in a 438 run stand for the second wicket.

So yes, the right-hander who got off to a forgettable start delivered the goods in spades.

He was a treat to watch when in full flow; a true technician with the willow once he got into his stride. That was when Marvan’s signature stroke – the classic cover drive – reigned supreme. So despite a rocky start, Atapattu the intrepid plodder at the crease left the game with his head held high.

And Marvan was lion-like in enforcing team discipline, so much so that he once summoned ace spinner Muttiah Muralitharan to the nets to practise batting – because as he explained, tail-enders can save and even win matches!

Marvan Atapattu has been credited with being a smart, shrewd and strategic leader; a traditionalist of sorts, he disliked the use of sunglasses on the field. And despite an inauspicious beginning (his first six Test innings produced as many as five ducks), Atapattu’s perseverance saw him through – and he ended his glittering career as one of Sri Lankan cricket’s supreme stylists.