Born to be king 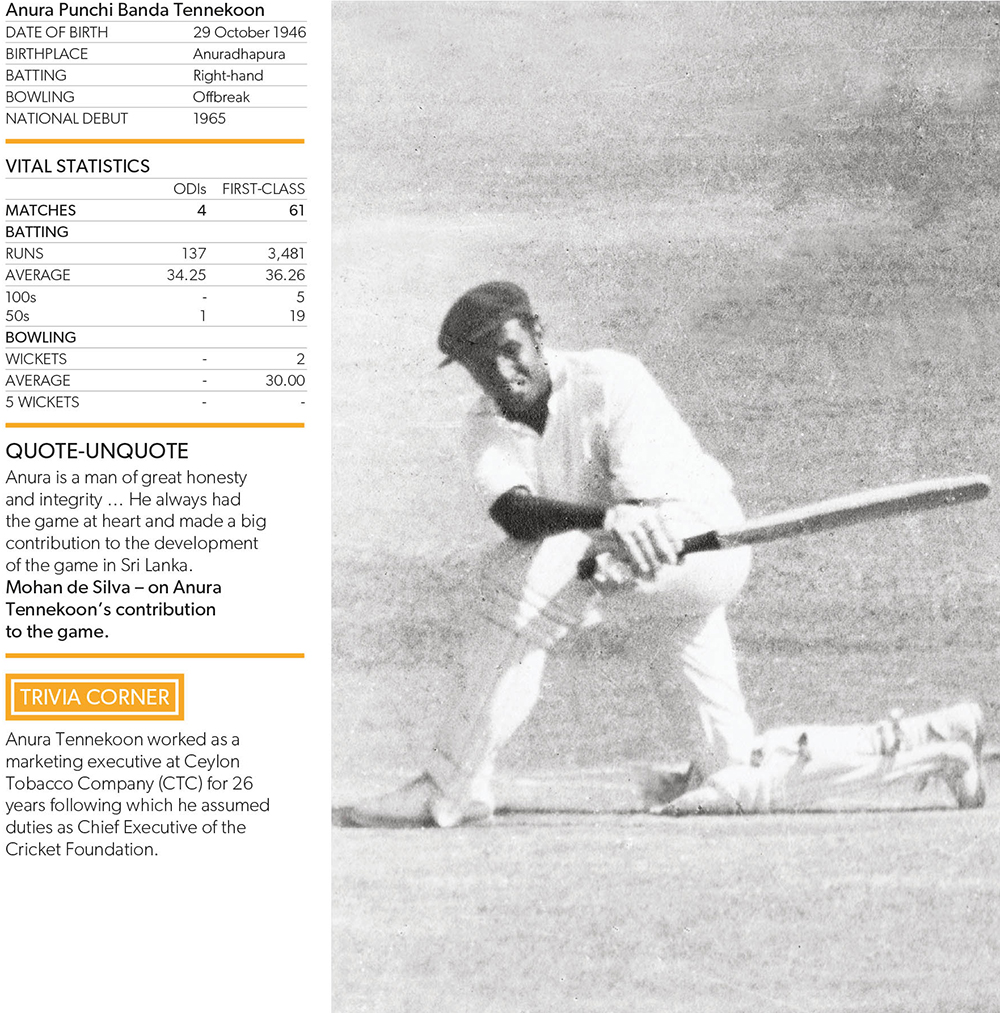 He was born in Anuradhapura and like many a king who hailed from that ancient capital, Anura Tennekoon went on to demonstrate that he was monarch of all he surveyed.

His chronicler Rohan Wijesinghe expresses this with lofty flights of fancy fitting for cricketing royalty. “Dainty elegance on the field, unassailable dignity off it. Winning was fine but losing gracefully was even finer – that’s Anura Tennekoon for you. He epitomises the very spirit of cricket. Anura – a cricketer and a gentleman in the widest sense of the phrase – is a class act by any yardstick indeed, from his thoroughbred walk to his unbridled charm and exquisite stick work at the crease,” Wijesinghe has written.

The king of local cricket had this patina of legend attached to his banner: “Elevated to the country’s leadership in 1974, his blade continued to carve runs – and carve them with a flourish. The relatively small build, dancing feet, exquisite timing and ramrod straight bat Anura... established supremacy over the bowlers within seconds of having scratched out his guard. His cover drives held one transfixed and he could clip a ball off his ankles with that wristy authority of his.”

Paying tribute to his sovereign Anura I of Lanka, the scribe remembers Tennekoon “prancing down the pitch with leisurely insolence to hammer the Indian spinners into a giddy spin – an attack led by the legendary [Srinivas] Venkatraghavan no less.”

He continues: “For good measure, he sank to his knees and swept ace medium pacer Madan Lal amongst the ivy, which sheathed the famed Oval scoreboard, in stroking 145 of the loveliest runs. To buttress the point, he notched an even better 169 in the second Test of that series against Ajith Wadekar’s celebrated Indians in 1974.” And let’s not forget that Tennekoon made memorable hundreds against England as well as the West Indies.

So is this humble adoration in hindsight or signs of hubris averted?

“That the little man’s big heart considered those travails as trivial is obvious, judging by the exemplary trail he left behind. One cannot recollect Anura being impaled by critic, colleague or opponent for well-nigh four decades or more,” writes the scorer, against Tennekoon’s name.

Be that as it may, even royalty must sometimes have plebeian origins – a history before the hagiography, at the very least!

So where does one start?

At the very beginning, in the ancient capital. Then to the school by the sea where Anura Tennekoon captained S. Thomas’ and was adjudged Best Schoolboy Batsman one year. Thence to play first-class cricket for Ceylon and eventually, to be appointed Chief Executive of Sri Lanka Cricket for three years.

He was also a national selector and last but not least, one of one short of 50 cricketers felicitated by the cricketing authorities for services rendered to the game in this country. Inter alia, add these jewels to his crown: the best schoolboy batting average (56.84) in 1963 with a tally of 513 runs; captaining Ceylon in the first Cricket World Cup (1975) and skippering the side in four ODIs; a career high of 169 not out in a first-class match against India (1974) – which is widely regarded as one of the best centuries by a local lad prior to gaining Test status; and perhaps most importantly, a stout heart as a coronet in these words.

So let’s permit the king himself to have the last word (from 2012): “I can put my feet up now but I don’t wish to do that. I will probably get involved with a bit of coaching. I would love to coach my old school team.”

That’s an epitaph fit for a monarch who was a man of the people and loved the game as much as his country.

Kings have a calling. So it comes as no surprise that while captaining S. Thomas’ in 1966, Anura Tennekoon was summoned to the Colombo Oval – Thomian cap atop a kingly head – to defend Ceylon against Ted Dexter’s touring Englishmen. Tennekoon was then called by SSC, to which club he rendered yeoman service – a baptism of fire, shall we say.