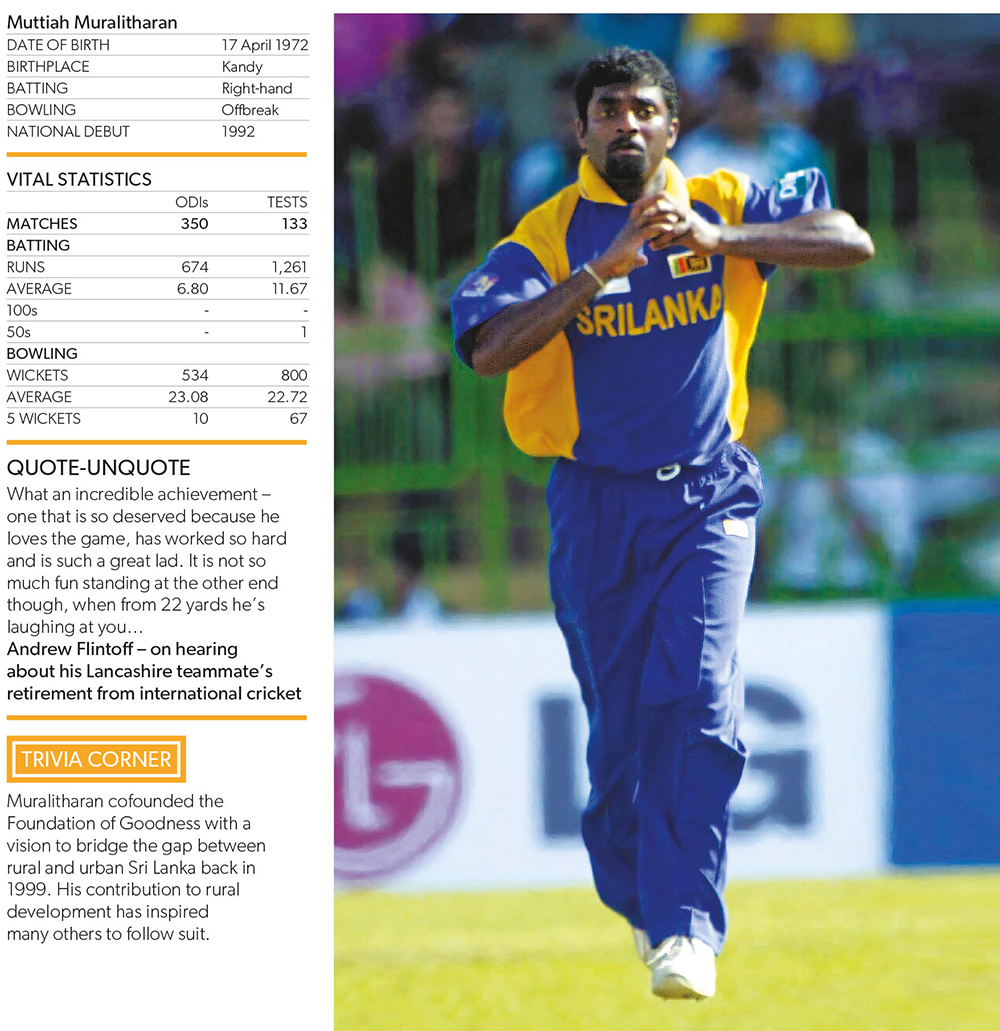 On 26 December 2004 when the Asian tsunami devastated coastal Sri Lanka, Muttiah Muralitharan had planned to visit a small village not far from Galle. But thankfully, he didn’t wake up on time to make the trip to Seenigama. Swathes of the village were washed away by the giant waves that morning.

There aren’t many legends about Muttiah Muralitharan’s personality off the field – not fast cars, the high life nor related pursuits. But picture him doing what he does best – bamboozling batsmen with unplayable deliveries and a whole host of features come to mind.

A grim yet not unpleasant gaze, eyes as wide as saucers, an arm bent at an almost impossible angle as it turns over his shoulder to send down a spinning ball to cause utter panic at the other end…

Muralidaran (which is how his name is spelt in some chronicles) is named after the Hindu deity Krishna (in Devnagri, ‘murali dhar’) whose Greek counterpart is the pastoral demigod Pan (from whom the word ‘panic’ stems)

And many a confident bat who went out there to teach the youthful upstart a lesson walked back to the pavilion beaten, dazed, confused and panic-stricken by the smiling assassin.

Murali – as he is widely known to a legion of admirers – didn’t start out as a deadly spinner but a medium pace bowler who took up offspin on the advice of his school coach at the tender age of 14. The stripling lad soon impressed as an all-rounder and went on to play for his school’s first XI for four years.

In his last two seasons at St. Anthony’s, he took over 100 wickets and was the Bata Schoolboy Cricketer of the Year in 1990/91.

Even the greats have dry spells especially early in their careers. Playing for Tamil Union, Murali was selected for the Sri Lanka A Team tour of England in 1991. Featuring in five matches, he failed to take a wicket.

Compare this strike rate with that of the man who ended his career as the highest wicket taker in Test cricket, averaging over six scalps an outing. The assassin’s victims were certainly not smiling then but may be doing so now, for such is the gentle charm of this seductive spinner who lures his victims to their devastation.

But it wasn’t genteel all the way. The ace spinner was dogged by controversy for much of his international career. Sri Lankans will surely still remember the incident when skipper Arjuna Ranatunga led his side off the field in protest at umpire Ross Emerson calling Murali’s action. Emerson’s compatriot Darrel Hair similarly had to face Ranatunga’s wrath over the same issue.

Thankfully, following biomechanical analysis under simulated playing conditions, Muralitharan’s action was cleared by the International Cricket Council (ICC) first in 1996 and again in 1999. Murali in effect now had a licence to kill with his deadly doosra!

Assassinate he did, going on to become one of the most feared and successful spin bowlers the game has seen, as well as cricket’s highest wicket taker in ODIs and Tests. Moreover, the first wrist spinning offbreak bowler in the history of the game baffled the best batsmen, gaining traction on just about any surface to end up in Wisden’s hall of fame.

In July 2007, Muttiah Muralitharan achieved a career peak Test Bowling Rating of 920 based on the LG ICC Player Rankings. This is the highest rating achieved by a spin bowler in Test cricket, putting him in fourth place in the LG ICC Best-Ever Test bowling ratings.

He also had the unique distinction of bagging 10 or more wickets in a match against all nine Test playing nations at the time in addition to taking more than 50 wickets against each of them. Murali also took at least five ‘five-fors’ against them all.

Muttiah Muralitharan is an enigma in more ways than one – both on and off the field. And when he was called for chucking down under, the nation literally rose to its feet in protest at what turned out to be an injustice. That said, the forgettable episode may have been a blessing in disguise because Murali’s wizardry grew in stature as his career progressed with the dreaded doosra taking the cricketing world by surprise. That he was a perennial match winner for his country, at times singlehandedly, is the stuff of legend.